Art as Mirror and Catalyst---Conversations at the Westport Arts Center 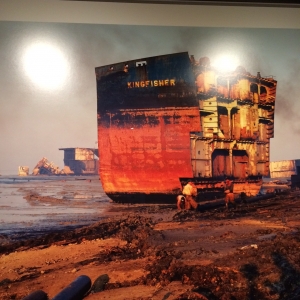 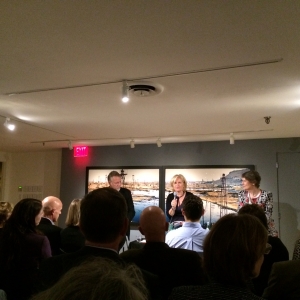 Last Thursday we had the pleasure of attending an informative and stimulating event at the Westport Arts Center. World renowned photographer Edward Burtynsky, whose large-scale photographs document the impact of industrial development on the world's landscape, and the Honorable Helen Clark, former Prime Minister of New Zealand and current head of the UNDP, engaged in a lively conversation on key environmental issues with Burtynsky's stunning photos as the backdrop.

After the introductions by Helen Klisser During, Burtynsky opened the discussion by explaining how he came to photography and specifically his subject. Originally interested in nature, he was struck on a trip to Pennsylvania by the impact mining had on the natural landscape and began visiting and photographing areas where the never-ending need for resources had altered the topography. He noted that before the industrial revolution, nature---through storms, floods, earthquakes, etc.---was the primary force that shaped our world, and that in our quest to insulate ourselves from nature's effects, through construction, climate control, and the energy needed to pursue these goals, humans have become the force reshaping nature and simultaneously harming the environment. As an artist, Burtynsky remarked, the challenge is to "move it off the banal image, to make form and content equal, and to create a visual experience that takes you in an evolves your sense of wonder, the way nature would." He described his work as revealing the landscape "we've created to achieve total dominance over the world." One of the attendees, collector Andrew Hall, whose foundation sponsored the exhibit, commented on the disconnect between the appeal of the images and their implied message, saying, “That should offend me, but I find it rather beautiful.” This echoed Burtynsky's earlier remarks on how art can bring about a shifting of consciousness that creates behavioral change.

Helen Clark spoke of her childhood in New Zealand, which she noted was the last land mass to be populated by humans. As a result, it was home to numerous species that evolved without predators, including birds that are unable to fly. She noted that now there are preserves where the introduction of absent species, such as rats or mice, that will alter the ecosystem, are forbidden and used this as a lead-in to talk about importance of sustainable growth and understanding that the waste we generate from our activities never goes away. With Burtynsky’s visual evidence of the transformation of nature into wastelands, and the ensuing environmental damage, surrounding the audience, Clark detailed the effortss of the UN development programs to address the impact of rapid population growth and the increasing need for food and energy.

Congressman Jim Himes was also in attendance, and when asked for a comment, he pointed out that while conservatives, such as Teddy Roosevelt, traditionally pioneered and supported efforts to protect the environment and advocated for proper stewardship of natural resources, that commitment has been picked up in recent decades by the left. He also noted the disconnect between the conservatives’ opposition to debt as stealing from the future to pay for the present and their opposition to a carbon tax, which forces present polluters to pay for the toll their activities exact on the future. It was a thought-provoking evening that exemplified the Westport Arts Center’s commitment to moving the conversation forward about art as both a social mirror and a social catalyst.

Edward Burtynsky is best known for his remarkable photographs, which explore the intricate links between industry and nature and find beauty and humanity in the most unlikely of places. He is an avid lecturer and has spoken at acclaimed institutions including National Gallery of Canada, Ottawa, the Library of Congress in Washington, D.C., George Eastman House in Rochester, NY, The Canadian Center for Architecture in Montreal, the Art Gallery of Ontario, the TED conference, Idea City, and Ryerson University in Toronto. His work is included in the collections of over 60 major museums around the world and is now on view at the Arts Center’s exhibition Edward Burtynsky: Nature Speaks.

The Honorable Helen Clark is the Administrator of the UNDP, which helps to build nations that can withstand crisis, and drive and sustain the kind of growth that improves the quality of life for everyone. The environmental branch of the UNDP oversees over 6,000 projects in 177 countries. Ms. Clark is the first woman to hold the position of UNDP Administrator. She recently spoke at a high level meeting about poaching and illicit wildlife trafficking and traveled to Armenia to meet with Armenian President Serzh Sargsyan. While Prime Minister, Ms. Clark advocated for New Zealand’s comprehensive sustainability program and for addressing the problems of climate change, aiming to establish New Zealand as a leader in addressing these challenges.

The discussion was part of the Arts Center’s In Conversation series, which brings notable speakers for informative discussions, most recently featuring iconic painter, Robert Cottingham in conversation with Robert Storr, Professor of Painting and Dean of the School of Art at Yale University and commissioner of the 2007 Venice Biennale.