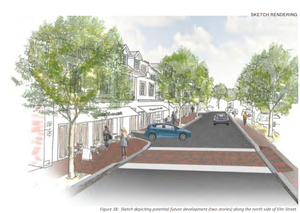 First Selectman Jim Marpe announced today that he has appointed Randy Herbertson, President of the Downtown Merchants Association and Owner of the Visual Brand, as Chair of the Downtown Plan Implementation Committee (DPIC). Mr. Herbertson will succeed longtime Chair Dewey Loselle, who recently resigned from the position.

“I want to thank Dewey Loselle for his tenure with the Downtown Plan Implementation Committee,” Mr. Marpe said.  “Over the last many years, Dewey insured the successful completion of important downtown projects, such as streetscape improvements on Elm Street, the Main Street sidewalk and lighting project, Veteran’s Green sidewalks and more.  Working closely with town departments to manage these projects, he utilized the Downtown Master Plan to guide priorities, while listening to the needs of the DPIC members, downtown residents, and businesses. He has been an invaluable resource to the downtown community and Westport in general. We wish him well.”

Mr. Marpe continued, “I am pleased that Randy Herbertson has accepted the Chair position. Randy has been a long-time advocate for all matters associated with downtown Westport, having the business experience and knowledge gained serving as a member on the DPIC. He brings a wealth of creativity and passion to the role that will ensure impactful projects will move along. His involvement in this capacity will maintain the momentum resulting from recent improvements such as the pedestrian only access to Church Lane and ushering 12 new businesses to the downtown area.”

Mr. Herbertson has indicated that, using the Downtown Master Plan (DMP) as a guide, he intends to prioritize the Baldwin and Parker Harding parking lots and Jesup Green for improvements. He also brings a vision for improved trash removal, smart city technologies, solarization and initiating a Downtown Special Services District.  He is focused on researching recent best practices and improvements made to other downtowns and Main Streets post- COVID-19 to determine if there are additional projects that would benefit Westport.

"As a long-time resident and Downtown business owner, I am very enthused to build upon the public and private collaboration this district has benefited from, even during this difficult past year. I look forward to contributing to building the success and distinction of Westport as a community and business destination."

The Westport Downtown Plan Implementation Committee (DPIC) serves as the appointed committee responsible for initiating and carrying out the implementation of the Downtown Master Plan (“DMP” or “Plan”). DPIC replaced and superseded the former Downtown Steering Committee (DSC), whose charge was successfully accomplished with the development and delivery of the Final Downtown Master Plan. The final plan may be downloaded from the Downtown Westport Master Plan website.

DPIC works closely with town departments, boards, commissions, civic groups, merchant associations, developers, property owners, state/federal officials, and citizens on tasks associated with planning and implementing the DMP.  The DPIC, in consultation with the First Selectman, leads the effort to set priorities for the various Plan projects and to initiate the appropriate actions to get those projects started. This includes, but is not limited to: