Everything is Green Lights: Prospector Theater Reopens with (even more) Sparkle! 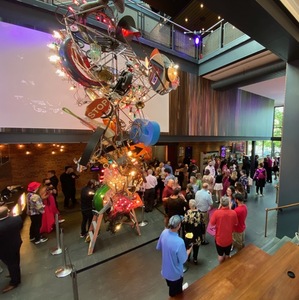 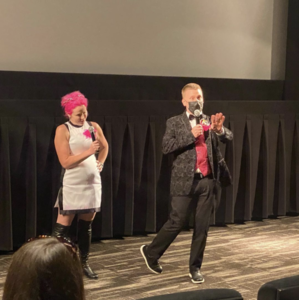 For the past eight years, The Prospector Theatre served as a cornerstone of the Ridgefield community. Now, after a harrowing fourteen months, Prospects are ready to reopen the theater to the public – doing so with more sparkle than ever before.

In preparation for today’s reopening, Prospects and their family and friends got together last night dressed in their best suits and even light-up dresses. The evening began with a tribute to Al, a hard working and loving brother, uncle, and Prospect who passed away earlier this month. Al’s name was added to the sculpture which serves as a focal point of the theater lobby.

“We want Al to remain with us and remain part of this building forever and so we’ve decided that we are going to put Al’s name on the Met’s batting helmet,” said Prospector Board President Val Jensen. “Now forever … Al’s right here, Al’s right here in the heart of the building.”

After this heartwarming tribute, Prospects and guests were invited into Theater 1 for speeches and a special announcement. First, starting today, all Prospects will be offered a free ticket to every new movie immediately with it’s release – no longer having to wait a week for viewings. Moreover, the speakers all stressed that the theater is equipped with accommodations that cinemas across the country simply do not have.

“A reason to come to The Prospector is, all of our theaters are equipped with assisted listening headphones and closed captioning devices you cannot get at home when streaming,” said Prospect Ryan.

However, The Prospector’s accessibility shouldn’t make it unique. “We are super accessible,” said Val, who continued to share her dream for such reliable accommodations to be the norm for all movie theaters.

Additionally, Val announced that she will be changing leadership roles as she takes on the new position as President of the Board of Directors. Meanwhile, Mike “Munchie” Santini will be taking over the role of Executive Director.

Following these announcements, the movie projector was illuminated for a special look back at all The Prospector Mission Statement videos from the past eight years. These pieces varied from PSA’s to touching testaments of the change and unique sparkle The Prospector provides. During this presentation, audience members sang along to their favorite Prospect Band tunes and Prospect raps This viewing closed with a beautiful memorial video for Al, featuring several interviews, video clips, and photos of the beloved Prospect in commemoration of his many years working at The Prospector.

Finally, after the closing remarks, attendees were invited to stay for a special pre-screening of “Cruella,” with permission from Disney, thus making those watching the first to see the film in the entire country.

Throughout the evening, the theater’s Covid and general health measures were highlighted several times to ensure audiences that their return to the movies will be both fun and safe.

All four theaters within The Prospector are equipped with fresh air intake systems which constantly circulate the air within the screening rooms with fresh, outside air. The mask policy goes as follows: please wear a mask if you are not vaccinated or under the age of 12. For those who are vaccinated, the choice of wearing a mask is up to you and your comfort level. Social distance should still be maintained inside the building.