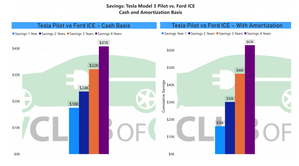 The Town has received a report generated by the EV Club of CT providing a financial analysis of the Westport Police Department’s Tesla Model 3.  In December 2019, the Westport Police purchased a Tesla Model 3, fully customized it for law enforcement, and put it into service in February 2020 as a pilot program. This first-in-the-nation Tesla Model 3 squad car is being celebrated for exceeding performance, cost savings and environmental benefits estimates.

Police Chief Foti Koskinas said, “What initially attracted us to the Tesla was how it compared to our traditional fleet vehicles in terms of performance, 5-star crash ratings, and collision avoidance technology. While the Police Department has been using plug-in hybrids for parking enforcement for several years now, this was the first fully electric car to be used in active duty. We needed to confirm our estimates on things like mileage per charge and how the vehicle would stand up overall in the challenging environment of police work. And of course, we were tracking expenses. The purchase price of the Tesla was higher than the Ford Explorer, but we hypothesized that we’d recoup that expense in lower fueling and maintenance costs for the Tesla.”

According to First Selectman Jim Marpe, “Westport is leading the way with electric vehicles and charging stations.  Our town government is also leading on the municipal front.  The decisions to invest in electric vehicles and infrastructure are strategic, data-driven, and smart. I applaud our forward-looking police department and the partnership of the department and the EV club. This is part of how Westport will meet its commitment to being net-zero by 2050.”

Charles Sampson of the Westport Police, who managed this project stated, “Feedback from the public has been overwhelmingly positive. We’ve have been contacted by at least 50 other police departments – from all over the world – with questions about our experience. I know many of them have gone on to purchase Teslas for their fleets.”

Barry Kresch, President of the EV Club of CT said, “I offered to do this analysis for the police because it is a such a visible and tangible proof point that EVs can be cost-effective, and that the decision by the Westport Police to move forward with the Tesla Model 3 pilot was financially, as well as environmentally, sound. The presentation I built for them visually demonstrates the economic case for using EVs in public sector fleets."

The Westport Police purchased a Tesla Model 3 in December 2019, fully customized it for law enforcement, and put it into service in February 2020 as a pilot program. This first-in-the-nation Tesla Model 3 squad car is being celebrated at its one-year anniversary for exceeding performance, cost savings and environmental benefits estimates.

There was a $15,300 differential in the purchase price of the Tesla vs. a Ford Explorer, which has been the workhorse of the fleet. The purchase price differential was recouped in the first year due to reduced customization and lower operating costs. All of these have been analyzed in detail.

Westport PD is exploring purchasing another Model 3, and while it would not receive first mover discounts that benefited the pilot vehicle, it’s still projected to recoup the price premium in year one due to much lower customization, maintenance, and fueling costs.

The cost of buying, customizing, and one year of ownership of the pilot Tesla was $68,700 and is projected to be $85,100 for a future Tesla Model 3. This compares to $86,300 for the Ford. Due to the customization discounts, this was a no-lose situation for the pilot vehicle. But the financial case remains strong even for a future Tesla.

None of these figures considers the projected differential in service life. The Ford has a documented service life of four years according to the Westport Police. Based on the first year of operations, the Tesla is expected to have a service life of six years. If we amortize the fixed costs (purchase and customization) of the vehicles, the savings are considerably greater.

For more information, please refer to this blog post.