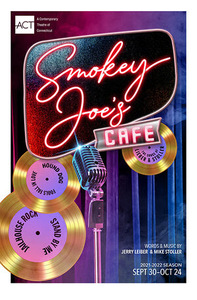 Want to win two FREE tickets to see Smokey Joe’s Cafe - The Songs of Leiber and Stoller at ACT of CT?! Visit Whip Salon Ridgefield or Whip Salon Westport between Friday, September 10th - Friday, September 17th to automatically be entered to win. One lucky winner from each salon will be contacted the week of September 18th to help select the date for your pair of tickets with compliments of Whip Salon.

CLICK HERE or call 855.WHIP.SLN to book your appointment.

Whip Salon is a proud sponsor of ACT of Connecticut (A Contemporary Theatre). ACT of Connecticut, founded and led by three Broadway professionals, is a non-profit Equity theatre that brings Broadway-caliber productions, new works and reimagined revivals to your backyard.

One of Broadway’s longest-running hits, SMOKEY JOE’S CAFE is a celebration of legendary songwriting team Leiber and Stoller, who virtually invented rock ’n’ roll. This high-energy and fast-paced show features nearly 40 of the greatest songs ever recorded including “Jailhouse Rock", "Stand By Me", “Yakety Yak”, “Hound Dog,” “On Broadway,” “Spanish Harlem” and many, many more. SMOKEY JOE’S CAFE is not only a fun-filled night of 1950’s Rock n’ Roll, it's electrifying musical theatre that will leave you flying high!