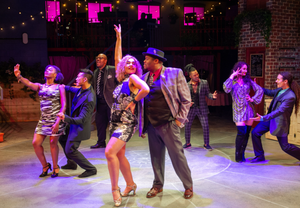 The words of the legendary Jerry Leiber and Mike Stoller are dead on.

They say the neon lights are bright on Broadway

They say there's always magic in the air

After a long hiatus due to the pandemic, ACT of Connecticut brings Broadway BACK with a BANG. And, indeed, the lights are shining bright and the magic is contagious inside the equity theater in Ridgefield, Connecticut.

1950s rock n’ roll music at its core combined with soulful choreography by Stephanie Pope Lofgren will make you literally dance in your seat, wave your hands (add hoot and clap when appropriate). When you step inside Smokey Joe's Cafe you’ll beg to stay past closing time.

The talented cast of eight has heart, rhythm and soul. They do so much more than sing -  with no dialogue, only music, they tell a story of an era in American history that has left an indelible mark thanks to Leiber and Stollers masterpieces including “Jailhouse Rock", "Stand By Me", “Yakety Yak”, “Hound Dog,” “On Broadway,” and “Spanish Harlem” (to name just a few).

The epitome of girl power is Keyonna Knight, Courtney Long, Kelly MacMillan belting out “I am a Woman”. These ladies have swag - they are sultry and empowering. Inside Smokey Joe’s Cafe, they join Broadway veterans Juson Williams (who recently appeared on NBC’s America’s Got Talent), Albert Guerzon (Dance Captain), Avionce Hoyles, Jordan Fife Hunt,  and Arnold Harper II. Together, they create sparks that reach beyond the walls of the contemporary theater.

ACT of Connecticut has made a triumphant return to live theater.

ACT (A Contemporary Theatre) of Connecticut is a nonprofit 501(c)(3) professional Equity theatre located in Ridgefield, CT. Founded in 2018 by Katie Diamond, Daniel C. Levine, and Bryan Perri, ACT of CT presents limited engagement runs of well-known musicals, as well as world-premiere productions by the next generation of writers and composers.