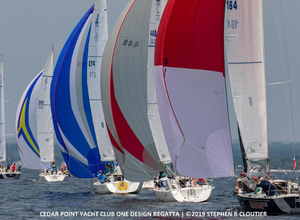 More than 450 sailors competed in five classes of sailboat racing this weekend, as Cedar Point Yacht Club hosted part 1 of its 2019 OneDesign Regatta. Westport’s big summer sailboat racing event attracted so many entries in recent years that it will be staged on two separate dates this year.

The highest finisher among Westport residents was Joshua Goldman in his boat, “Building A,” finishing second in the J70s. Joshua, a Saugatuck Island resident, races out of Cedar Point Yacht Club. Westport’s Saugatuck Harbor Yacht Club had a first place winner in Alistair Duke, of Wilton, in “Frequent Flyer,” in the Beneteau First 36.7 class championship.

The other winning skippers and classes were: (53 boats competing):

“The annual summer OneDesign Regatta at Cedar Point Yacht Club has become so popular that it outgrew being a one-weekend event,” said John Cooke, CPYC OneDesign Regatta Chairman. “We thank our many CPYC volunteers for making the first part of our 2019 event a great success. By staging two regattas, we will be able to host more fleets and boats, and to better deploy our CPYC race volunteers over two weekends.”

Cedar Point Yacht Club was organized 132 years ago, in 1887, by Fairfield County sailing enthusiasts. The regatta comes just a few months after CPYC won US Sailing’s prestigious award, the “One Design Club of the Year.” Click here for information.

For information: William Adler, 203 767-8001/ This email address is being protected from spambots. You need JavaScript enabled to view it. / www.cedarpointyc.org.