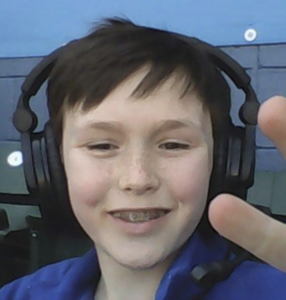 Fairfield, CT - First Selectman Mike Tetreau is very pleased to announce that Fairfield Ludlowe High School (FLHS) student and former Fairfield American Little League player Aiden Blanc who, along with three other teens from around the country, has been chosen by ESPN to broadcast one of the Little League World Series games on August 21, 2019 at 7:30 pm on ESPN2.

According to ESPN’s press release, “On Wednesday, August 21, 2019 at 7:30 p.m. ET, ESPN2 will have a special Kidscast alternative experience. Aspiring broadcasters recruited from the Bruce Beck Sports Broadcasting Camp at Iona College will call Game 24 in the U.S. Winner’s Bracket. Sixteen-year-olds Eddie Kalegi and Aiden Blanc will be providing play-byplay in the booth as 15-year-old reporters Zoe Alter and Rahill Jaiswal are on the sidelines. Little League trailblazer Mo’ne Davis, the 2014 Little League Baseball World Series pitching sensation, will make her return to Williamsport and have a hand in the telecast as an analyst. A traditional broadcast of the game will simultaneously broadcast on ESPN.”

At just ten years old, Aiden was emceeing the Opening Day Ceremony for Fairfield American Little League! Now 16 and going into his junior year, Aiden has been broadcasting games at FLHS and is very excited to provide play-by-play for one primetime game at this year’s tournament for ESPN on August 21st!

Aiden has sent a thank you to the Fairfield community stating, “The years that I spent in Fairfield Little League were wonderful. Playing in the League taught me so many valuable life lessons. I had my ups and downs, wins and losses. In addition, I quickly learned that maybe I was a better speaker than player so I turned to broadcasting. I want to sincerely thank the League and the Town of Fairfield for everything they have offered me and, hopefully, what I gave back to them. The League has continued to support me this summer with a sponsorship donation to my American Legion broadcasts which was has been a big help! Thank you all. I hope you can tune in to the game on the 21st!”

On Tuesday, August 27, 2019, the Town will hold a celebration at 4:30 pm at the Sherman Green Gazebo for four Little League Team Champions and will also honor Aiden during the celebration which is open to all members of the public. The photos show Aiden holding The John Drury 2018-2019 High School Radio Award (for) Best Newscast WFLD Fairfield Ludlowe High School and being congratulated by First Selectman Mike Tetreau in Independence Hall.