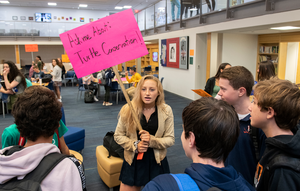 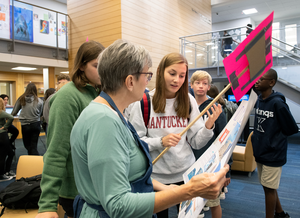 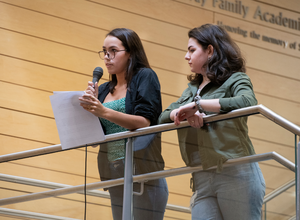 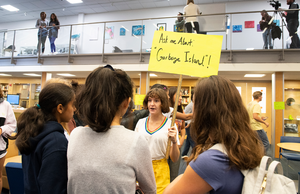 King School Upper School (US) students Samantha Berman '21 and Sarah DiModica '21 are taking a stand on climate change. On Friday, Sept. 27 they organized a Climate Week strike during the US Advisory period. The entire Upper School community was encouraged to join in for a variety of speeches and interactive features, which included:

"We're really happy with the outcome of our climate strike. The enthusiasm we saw is evidence of the power and urgency of this movement," comments Samantha. "We are fighting for our right to a secure, sustainable future. The government and major corporations continue to prioritize the economy over the lives of billions of people, and that isn't permissible. Our planet is dying and we will not accept inaction or empty promises any longer."

King's commitment to service affirms the belief that all students can learn and become responsible, productive citizens, locally and globally. Samantha and Sarah certainly illustrated that belief on Friday as they planned the strike to raise awareness about the climate crisis and get King students involved in the movement.

"The support from our volunteers, King faculty and the student body was an amazing thing to see. In the future, we want to continue to fight for various ecological crises and decisive political action. This is a fixable issue, but only if everyone in the world commits to the solution," adds Samantha.