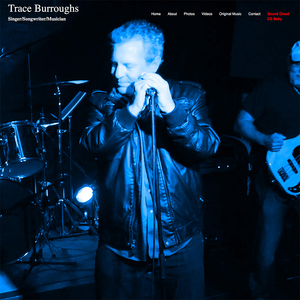 Songwriter/musician Trace Burroughs is offering his library of 63 songs for music publisher consideration, as well as for groups or performers to cover and perform live or on a music release for free.

His songs are in the genres of adult contemporary/blues, rock, modern country and pop. Those songs can be heard here.

He is also producing a musical group of singers to perform classic hard rock songs at special events. You don't need to be an A level singer, but able to belt a song.

"Carol King is my inspiration. She wrote songs in many genres."  Upon request, a group or musician can take one of his songs, make them their own and perform or release it. Contact him at This email address is being protected from spambots. You need JavaScript enabled to view it. or go to his music site TraceBurroughsMusic.com

A longtime Westport and Redding resident who broke two Guinness Book Records for marathon drumming and was interviewed by David Frost.

Trace is also an artist that exhibits his work in shows and galleries throughout Fairfield County. He has dabbled in many creative careers. His comic animations have been seen on television and in film. He was an announcer on Nickelodeon and the author of 6 bricks and mortar published books. His book Star Morphs was featured on all 3 television network morning shows and in People Magazine.

"I like challenging myself creatively" Available for performing/musical collaborations.