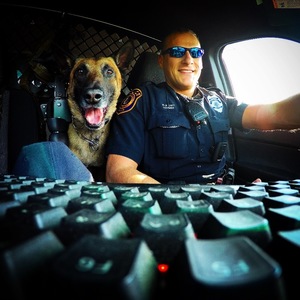 It is with a heavy heart that the Westport Police Department plans to announce the early retirement of Police Service Dog Koda due to recently diagnosed health concerns.  Koda is a nine year old Belgian Malinois that was imported from Hungary and joined the Westport Police Department in February of 2012.  At eighteen months old, Koda completed a thorough ten week training course where he became certified in narcotics detection, tracking, handler protection, and criminal apprehension.  Since beginning his law enforcement career, Koda has been partnered up with Officer James Loomer, who joined the department in February of 2010. Officer Loomer and Koda have since worked full time in the patrol division.  Through the duration of their partnership, they have responded to over six hundred canine-related calls for service for the town of Westport and other neighboring municipalities.

In order to officially announce Koda’s retirement, as well as to mark the commencement of this fundraising drive, all are welcome to join us for a brief ceremony to be held at 9:30am on Friday, December 13, 2019 in the Westport Police Department’s classroom; located at 50 Jesup Road in Westport.