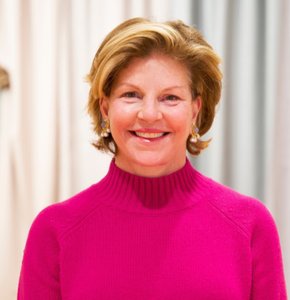 The Board of Trustees of The Aldrich Contemporary Art Museum is pleased to announce that Diana Bowes was elected Board Chair at their most recent meeting. She succeeds Eric Diefenbach, Board Chair since 2012, who will remain an active trustee.

Bowes, who resides in Westport, CT, has been on The Aldrich’s Board since 2014 and has served as Vice-Chair since 2017. A longstanding member of the Fairfield County community, Bowes has worked on behalf of many educational, arts, and civic organizations in the area. A native of San Francisco, she has been an active collector and champion of contemporary artists for decades.

“For close to ten years, Eric successfully guided The Aldrich as the Chair of the Board of Trustees, steering the Museum into its 6th decade. In recent years he has been ably supported by Diana in the role of Vice-Chair and I am thrilled to work with her now as she steps into this new role as the Chair of the Board,” said Cybele Maylone, The Aldrich’s Executive Director.

Diefenbach shared, “Diana Bowes is the perfect choice to lead The Aldrich’s Board going forward. She is both a passionate and tireless ambassador, and a skilled people connector and collaborator. Diana’s leadership, together with Cybele Maylone and The Aldrich’s staff, uniquely equip the Museum for success in its next chapter.”

“It has been an absolute pleasure to work alongside Eric Diefenbach these last few years. I am both thrilled and honored to take over for him as Board Chair of The Aldrich. The combination of Executive Director Cybele Maylone, Exhibitions Director Richard Klein, Senior Curator Amy Smith-Stewart, and the Aldrich staff is a dream team that works tirelessly to realize our mission of serving artists,” said Bowes. She added, “The Aldrich is on a great upward trajectory, with renewed excitement in our programs along with the critical acknowledgement the Museum deserves. I look forward to this next phase, working with the Board to help make The Aldrich the best it can be.”

Andrew J. Pitts, a Greenwich resident and partner at Cravath, Swaine & Moore LLP, has been elected as Vice-Chair and will support Bowes in her role leading the Museum’s Trustees.