Westport Fire’s Response to the NYC and Philadelphia Tragedies 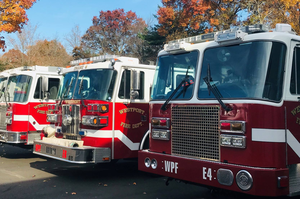 This past week, New York City and Philadelphia suffered two deadly fires that have claimed the lives of 31 people. Our hearts go out to the victims and to our brothers and sisters at the FDNY and the Philadelphia Fire Department who struggled so valiantly to save them.

Fire Chief Kronick said, “Whenever you hear a fire alarm sound, head to the nearest exit and leave the building. If you see fire or smell smoke, call 911 immediately. When you escape a fire, close the door behind you. Every closed door slows the spread of the smoke and fire. This buys you more time to escape and protects others as well.”

A Philadelphia Fire Department official said that at least four smoke detectors in the rowhouse did not go off during the fire. “If you do have a smoke alarm with removable batteries, make sure you replace those batteries every six months. It's best to do it when you change your clocks twice a year.”

A FDNY Fire Marshal reported that the Bronx fire was likely caused by a space heater that had been running non-stop for several days. Space heaters are not intended to be a 24/7 heating source. They can overheat, overload electrical circuits, and ignite flammable material, like furniture cushions, if the heater is too close. “Whenever you use a portable heater, set it up a safe distance from anything that can burn, never use an extension cord, and check the heater to make sure it’s operating correctly.”

Many of the victims died from smoke inhalation while trying to escape, in corridors and stairways. In a high-rise building, toxic smoke can move faster than you can. So, in a high-rise fire, never enter a space that is smokier than the one you’re in. If the corridor is full of smoke, do not enter it. Stay where you are, close the door and seal it off with towels or blankets. If you’re heading down the stairs and conditions get worse, leave the stairs and shelter on another floor. “Most importantly, have an escape plan and practice that escape plan before you need it.”

The fires are terrible tragedies, for the victims, their families, and the first responders. Our heartfelt sympathies to the families and friends of those who lost their lives or were injured. We are reminded of the devastating impact of fire and the need to do more to prevent them in the future.  As we mourn the loss of these lives today, we must use these tragedies to continue efforts to ensure the public and communities prioritize fire safety - in particular the use of smoke alarms, escape planning, and educating our most vulnerable.