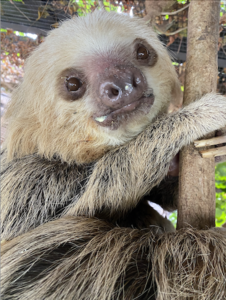 BRIDGEPORT, Conn. – Rhubarb the two-toed sloth will officially take on the duties and responsibilities of Mayor of the Zoo on Thursday, December 8 at 9:30am in the Zoo’s Rainforest Building.

The Swearing-In Ceremony will be conducted by Zoo Director Gregg Dancho and witnessed by Zoo staff and rainforest friends. After taking the official oath of office, Rhubarb will have the opportunity to make remarks or to go back to sleep.

The Farmyard Party earlier issued a statement on behalf of the current mayor, Harry the Guinea Hog, promising allegiance to Rhubarb and a smooth transfer of power. As the second-place winner, Goncalo the Maned Wolf will serve as runner up if Rhubarb is unable to fulfill his duties through the duration of his term. Rhubarb is the first sloth to hold the Zoo’s highest office.

The highly contested race was decided by online votes, with the public voting for the candidate of their choice by making a one-dollar donation for each vote.

“Rhubarb will not be in a hurry to make changes, but he promises not to leave his constituents hanging,” said Zoo Director Gregg Dancho. “By electing an animal as mayor of the Zoo, we hope to recognize the unique contributions of our animal family and highlight the importance of biodiversity to the planet.”