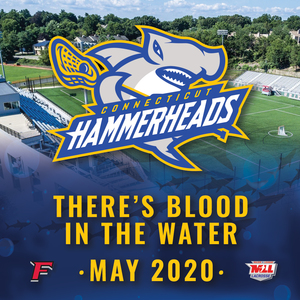 The Connecticut Hammerheads franchise is joining Major League Lacrosse ahead of the 2020 season. Five home games are scheduled to be hosted at Fairfield’s Conway Field at Rafferty Stadium, with a season opener on May 30.

Major League Lacrosse Commissioner Alexander Brown announced today that the Connecticut Hammerheads would join the league as its newest franchise. The team, led by head coach Bill Warder, will play at Fairfield University.

A press conference will be held at Fairfield University on Friday, February 28 at 10:00 a.m., offering an opportunity for media, fans and the public to meet Connecticut Hammerheads’ team leaders, coaches and players.

The Hammerheads will be the league’s first team to play in the state of Connecticut since the Bridgeport Barrage, which played from 2001-2003 before relocating to Philadelphia.

“This is a special day for Major League Lacrosse, as we announce the Connecticut Hammerheads franchise,” President Ian Frenette said. “The MLL has prided itself over the last 20 years in influencing the growth of lacrosse by showcasing the best lacrosse players in the world through our league. Connecticut is a hotbed lacrosse community and is home to many of the top youth, club, high school and college programs in the country. We’re excited to make the state of Connecticut a home of Major League Lacrosse, and work with community leaders, businesses, and local non-profit organizations to bring a positive impact to the entire community.”

The Connecticut Hammerheads will call Fairfield University their home, playing all five of their home games on Conway Field at Rafferty Stadium. A premier lacrosse venue, Fairfield University’s lacrosse facilities feature a Daktronics HD video board, a state-of-the-art sound and lights system, and a FieldTurf playing surface. The 3,500-seat stadium also features two VIP suites and a fully integrated production suite and press box for media.

“We are thrilled to welcome Major League Lacrosse and the Connecticut Hammerheads to the Fairfield University campus,” said Director of Athletics Paul Schlickmann. “As our athletic programs continue to grow, it is important to build strategic partnerships with organizations like the MLL to expand our reputation nationally and showcase our exceptional facilities such as Conway Field at Rafferty Stadium.”

The Hammerheads open their season at home on May 30th at Rafferty Stadium, which was built in 2015. The season opener will be the second-ever MLL game played in the stadium, as Fairfield University hosted a 2016 MLL semifinals matchup between the Denver Outlaws and the New York Lizards.

“We are thrilled to bring the first major professional team to the Fairfield community,” said Brown. “MLL enjoyed a tremendous experience hosting a 2016 semifinal game at Fairfield, and we know that Fairfield offers our athletes, fans and partners the ideal viewing experience. With a growing national spotlight in our sport, Connecticut seemed a perfect fit to host the next MLL team.”

The Hammerheads franchise opening in Connecticut will be a homecoming for head coach Bill Warder, who played for the Bridgeport Barrage during the MLL’s inaugural season. Warder has served as a coach in Major League Lacrosse for twelve years. In that time, he was the assistant coach for the 2008 MLL champions, and was named the 2018 MLL Coach of the Year. He had a decorated playing career as the starting goalie for Hobart College for the 1993 Division III NCAA National Championship team and the 1994 Division III finalist, then played professionally in MLL and the National Lacrosse League (NLL). Warder most recently served as the head coach of the Dallas Rattlers from 2016-2019.

For more information on Hammerheads season tickets, please email This email address is being protected from spambots. You need JavaScript enabled to view it. . Tickets will go on sale on Wednesday, March 11.