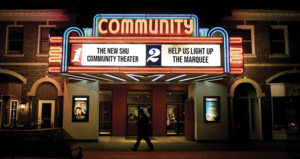 FAIRFIELD, Conn.—Since acquiring the Fairfield Community Theater last May, Sacred Heart University has endeavored to renovate the historic building from the ground up as a new, state-of-the-art facility for film events and live performances.

Bringing the theater back to its former glory has entailed challenges, but with community support, Sacred Heart is determined and committed to restoring all the iconic theater’s memorable features, including its neon marquee, ticket booth and stage proscenium.

“We’re creating a premier cinema, stage and educational experience at this historic venue and bringing great entertainment and performing arts back to the town square at the corner of Post and Unquowa roads,” said Bill Harris, theater director. “We’re installing new seats, a digital projector, screen and sound system. We’re also extending the stage so we can host a wide range of music, live performances and community events.  In addition, we will introduce some free, after-school programs, master classes, eSports, matinees and dinner-and-movie nights.”

With all of these additional goals for the SHU Community Theater, Harris said the project has expanded beyond its original budget, with the costs of painstaking historic restoration a major factor. “At this point, we need to raise some additional funds to renovate, restore and return the theater to its original grandeur—and beyond,” he said.

Following the theater’s heyday—first as an early 20th-century burlesque hall and later a movie theater—the venue slowly ran down. It became a discount movie house in disrepair and then was shuttered for the better part of the past decade, Harris said, but once the lights come up again, it will be managed with a new purpose and impact.

“Everyone is looking forward to reminiscing about their time growing up with the theater and imagining the new experiences they will have when we’re open. The community is really excited to get involved and be part of the new Sacred Heart Community Theater,” Harris said.

To help restore the Fairfield Community Theater to its original stature, visit https://weareshu.sacredheart.edu/project/19140.