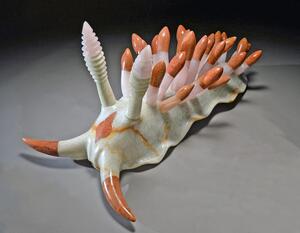 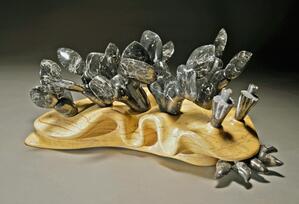 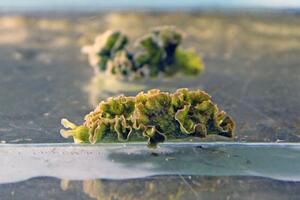 Marvel at the fascinating forms and adaptations of animals from ocean reefs and freshwater streams – and discover the important warnings they can tell us – in “A Slug’s Life: Facing the Climate Endgame,” a special exhibit that showcases live creatures with their representations in art, opening Jan. 16 in The Maritime Aquarium at Norwalk.

Stars of the new exhibit are an order of mollusks called nudibranchs known for their striking forms and brilliant colors. Nicknamed “sea slugs,” nudibranchs occur in some 3,000 species in oceans all around the world. (Some two dozen are found in Long Island Sound.)

In addition to live nudibranchs and other mollusks, “A Slug’s Life” will feature nudibranchs depicted in onyx and marble sculptures by Gar Waterman of New Haven, as well as nudibranch photographs by divers from all around the world.

“This exhibit represents a revolutionary new approach for The Maritime Aquarium, and one that is relatively unique among aquariums,” said Jason Patlis, the Aquarium’s president and CEO. “By bringing together live animals, sculptures and photographic images to showcase these really remarkable animals and their fight for survival against climate change, we are telling a powerful story to multiple audiences through multiple media.”

Nudibranchs are generally less than 3 inches long. Because these tiny creatures react very quickly to environmental change, they’re considered by scientists to be an “indicator species.”

“Divers like to seek out these pretty little animals to photograph, and so the notable presence – or sudden absence – of sensitive animals like nudibranchs might indicate the health of a marine environment, or possibly ‘red flag’ an issue before it becomes obvious,” said Barrett Christie, the Aquarium’s director of Animal Husbandry. “So even without special equipment, researchers may be able to get an idea of how well a reef is doing by looking for nudibranchs.”

Besides the live nudibranchs, “A Slug’s Life” will display an assortment of other live mollusks in diverse shapes and sizes – some with shells, some without – including a common octopus, sea hares, conchs, abalone, giant clams and Indo-Pacific snails.

Plus, the exhibit will include a display of live freshwater mussels, another “indicator species” that – as a group – are considered the most endangered animals in North America. By their filtering water in streams and rivers, freshwater mussels play a critical role in keeping ecosystems healthy, yet 35 species have gone extinct since 1900 and the remaining species’ populations have declined by about 70 percent.

Blending nature with art, "A Slug’s Life” will display more than a dozen dynamic sculptures of nudibranchs by Gar Waterman, son of pioneering underwater filmmaker Stan Waterman (“The Deep”). The younger Waterman spent a formative year at the ages of 9 to 10 in Tahiti, where his father was filming a National Geographic special. Waterman says that watershed year of almost daily contact with marine life on the South Pacific barrier reefs established a visual foundation of marine imagery that endures as a primary source of inspiration for his sculpture. After college at Dartmouth, he spent seven years in Italy learning to carve stone, eventually returning to establish West Rock Studio in New Haven, where he has lived and worked for the last 25 years.

Waterman considers himself to be “the world’s only stone sea slug sculptor.”

“Of all the strange creatures to be found underwater, nudibranchs are just bizarre and colorful enough to catch the public's eye and be tapped as heroes of biodiversity,” Waterman has said of his art. “Any means of presenting the incredible biodiversity that is at risk in the world’s oceans to a generally disengaged public carries a potential for sparking positive change.”

“The diversity of artists who are joining forces in this story of ‘A Slug’s Life: Facing the Climate Endgame’ underscores the most important message of the exhibit: that the ocean inspires us in many different ways, and yet it is in trouble, and we need to act now to save it,” Patlis said.

“A Slug’s Life: Facing the Climate Endgame” will be open through June 13 and is free with Aquarium admission. In conjunction with the exhibit, The Maritime Aquarium will be offering new educational programming and additional events during the run.

Learn more about the Aquarium’s exhibits, educational programs and conservation efforts at www.maritimeaquarium.org.