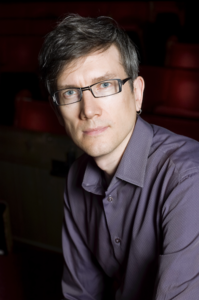 Westport, CT - Westport Country Playhouse’s New Works Initiative (NWI) begins its 2021 season with a virtual workshop of “The Immaculate Perfection of F---ing and Bleeding in the Gender Neutral Bathroom of an Upper-Middle Class High School,” written by Daniel Halpern and directed by Margot Bordelon, on Wednesday and Thursday, May 26 and 27.

The first of four plays in NWI’s 2021 season, “The Immaculate Perfection…” revolves around the final year of high school for a group of students who spend their time smoking, crying, and touching each other in the gender neutral bathroom. After a trans-senior conceives a baby despite being a virgin, the adolescents are made to reassess their priorities, friendships, and what safety means to them.

"’Immaculate Perfection…’ expresses beautifully the joy, pain, and confusion of youth, of coming to terms with difference in a world that expects you to conform, and of finding your community at that moment in life where you’re just starting to find yourself,” said David Kennedy, Playhouse associate artistic director. “Daniel [playwright] explores the vulnerable teen years with wit, sagacity, and a remarkable tenderness. It’s a work of extraordinary promise, and I’m pleased we can give them this opportunity to develop it.”

The Playhouse’s NWI provides an artistic home to writers and theater makers, offering the resources and support necessary to further the growth of their works. NWI gives playwright and director two days to dive into the world of the play, making any changes and edits that might further the play’s development. On the second day of the workshop, the company rehearses for half a day, and later reads through the play for an audience of invited guests. NWI is presented under strict COVID-19 protocols.

Playwright Daniel Halpern (they/them) is a Canadian-based playwright and theatre artist. They are the co-founder and artistic co-director of the BodyCube Arts Collective, which has had work appear throughout Canada, New York, Germany, and the Netherlands. Some notable recent credits include writing and acting for “An Orchid and Other Such Lilies and Lies” (BodyCube) at the 2019 Toronto and Atlantic Fringe Festivals, and performing in “The Second Woman” (Harbourfront Centre) at the 2019 Brave Festival. They graduated from the University of King's College and Dalhousie University with a combined honors in Theatre Studies and Contemporary Studies, and are currently enrolled in the University of Alberta, pursuing an MA in Drama with a focus on performance-based activism.

Upcoming NWI plays include “Culture Shock” by Gloria Majule in July, about two African students, Zahra from Tanzania and Hawi from Kenya, who start school in an Ivy League institution; and two other new works TBD.

Throughout its 90 years, Westport Country Playhouse has been home to 60 world premiere productions of new plays and musicals, most recently, “Thousand Pines” by Matthew Greene, directed by Austin Pendleton, in 2018.

The Playhouse’s 2021 Season includes two new virtual productions, “Tiny House,” a timely new comedy, written by Michael Gotch, and directed by Mark Lamos, Playhouse artistic director, playing June 29 through July 18; and “Doubt: A Parable,” the Pulitzer Prize and Tony Award-winning drama written by John Patrick Shanley and directed by David Kennedy, Playhouse associate artistic director, playing November 2 through November 21. Two HD video productions from the Playhouse archives will stream on-demand, beginning with the musical, “Man of La Mancha” (2018), from August 23 through September 5, and another TBA, from September 13 - 26. Three Script in Hand playreadings will include “The Savannah Disputation” by Evan Smith, from June 15 - 20, and two others TBA, October 19 – 24, and December 14 – 19. The complete schedule is available at westportplayhouse.org.

All play titles, artists, dates, and formats are subject to change.

For information and tickets, visit westportplayhouse.org, call (203) 227-4177, or email  This email address is being protected from spambots. You need JavaScript enabled to view it. . Stay connected to the Playhouse on Facebook (Westport Country Playhouse), follow on Twitter (@WCPlayhouse), and on YouTube (WestportPlayhouse).

Founded in 1931, Westport Country Playhouse is celebrating its 90th anniversary year. The mission of Westport Country Playhouse is to enrich, enlighten, and engage the community through the power of professionally produced theater of the highest caliber and the welcoming experience of the Playhouse campus.  The not-for-profit Playhouse provides this experience in multiple ways by offering live theater experiences of the highest quality, under the artistic direction of Mark Lamos; educational and community engagement events to further explore the work on stage; the New Works Initiative, a program dedicated to the discovery, development, and production of new live theatrical works; special performances and programs for students and teachers with extensive curriculum support material; Script in Hand play readings to deepen relationships with audiences and artists; the renowned Woodward Internship Program during the summer months for aspiring theater professionals; Family Festivities presentations to delight young and old alike and to promote reading through live theater; youth performance training through Broadway Method Academy, Westport Country Playhouse’s resident conservatory program; and the beautiful and historic Playhouse campus open for enjoyment and community events year-round. Charity Navigator has recently awarded its top 4-star charity rating to the Playhouse in recognition of its strong financial health and commitment to accountability and transparency.