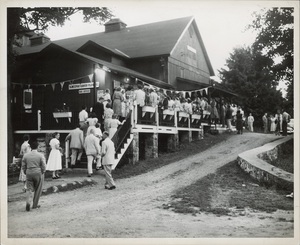 Westport, CT - Ninety years ago, on June 29, 1931, Westport Country Playhouse opened its doors to its very first stage production. This year, on the exact same day, the Playhouse will mark its 90th anniversary with the opening of the virtual production, “Tiny House”, written by Michael Gotch, and directed by Mark Lamos, Playhouse artistic director. The regional premiere of the timely comedy about escaping urban life in an isolated mountain paradise will stream on demand from Tuesday, June 29 through Sunday, July 18.

“I love the coincidence of June 29!” said Lamos. “As we honor the Playhouse’s remarkable 90-year history, we also look forward to new artistic choices that speak to the world today.”

In the early 1800s, the building that would become Westport Country Playhouse was built as a tannery, manufacturing hatters’ leathers. In the 1920s, in what was then the outskirts of Westport, it stood as an abandoned barn. That barn was transformed into the “Country Playhouse” in 1931 by Lawrence Langner and his wife Armina Marshall, residents of Weston, Connecticut, and producers with Broadway’s Theatre Guild. Their first Playhouse production, “The Streets of New York,” opened on June 29, 1931. The Langners ran the Playhouse first as a Broadway try-out house, then as a summer theater, bringing to its stage many of the most celebrated names in entertainment of the era.

In 1959, the Langners turned over operation to James B. McKenzie, who held the title of executive producer for most of his 41 seasons with the Playhouse. In the 1960s, McKenzie became the originator of a new business called star packages, rehearsing 10 plays in New York every June, and sending them to 10 different summer theaters. The Playhouse was an established stop on the New England straw-hat circuit of summer stock theaters through the end of the 20th century.

In 2000, acclaimed actress and director, and long-time Westport resident Joanne Woodward took the helm, along with theater veteran Anne Keefe. After a multi-million dollar renovation in 2005, the Playhouse emerged as a year-round, state-of-the-art producing theater, preserving its original charm.

Mark Lamos, prominent director of theater and opera, is currently in his 13th season as Playhouse artistic director. During his tenure, the Playhouse was named “Theater Company of the Year” by The Wall Street Journal.

Among the over 800 productions staged at the Playhouse, some have made the leap from Westport to theatrical history. In 1940, after seeing a performance of the play “Green Grow the Lilacs” at the Playhouse, Richard Rodgers was inspired to write “Oklahoma!” with Oscar Hammerstein II, based on the play. Alan Jay Lerner and Frederick Loewe saw “Pygmalion” at the Playhouse in 1952, sparking them to transform it into the musical “My Fair Lady.” In 1949, the world premiere of “Come Back, Little Sheba,” starring Shirley Booth, transferred from the Playhouse to Broadway, earning Booth a Tony Award.  Another Broadway transfer in 1969, “Butterflies Are Free”with Blythe Danner and Keir Dullea, garnered a Tony for Danner. A revival of “Our Town,” with Paul Newman in 2002, went from a sold-out run at the Playhouse to Broadway and was filmed for Showtime and PBS.

In addition to “Tiny House,” the Playhouse’s 2021 season includes “Doubt: A Parable,” the Pulitzer Prize and Tony Award-winning drama written by John Patrick Shanley and directed by David Kennedy, Playhouse associate artistic director, from November 2 through November 21. Two HD video productions from the Playhouse archives will stream on-demand, beginning with the musical, “Man of La Mancha” (2018), from August 23 through September 5, and another TBA, from September 13 through 26. All 2021 Playhouse events are listed at: https://www.westportplayhouse.org/whats-on/.  All dates, titles, artists, and formats subject to change.

More information and virtual tickets for “Tiny House” at: https://www.westportplayhouse.org/show/tinyhouse/  or visit westportplayhouse.org, call (203) 227-4177, or email  This email address is being protected from spambots. You need JavaScript enabled to view it. . Stay connected to the Playhouse on Facebook (Westport Country Playhouse), follow on Twitter (@WCPlayhouse), and on YouTube (WestportPlayhouse).