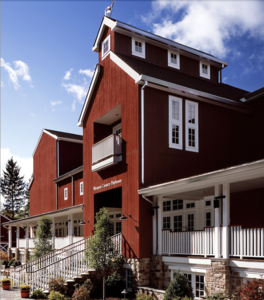 Westport, CT - Westport Country Playhouse announces updates to its 2022 season playing from April through October, including a change in the production lineup, the addition of two new directors, and a shorter run for four of the five shows.

“When scheduling conflicts made it impossible for us to produce ‘Ain’t Misbehavin’,’ I felt ’Kim’s Convenience’ was exactly what we should do,” said Mark Lamos, Westport Country Playhouse artistic director. “After an acclaimed Canadian tour, it spawned the popular series on Netflix. The play is funny, smart, insightful, moving, and ultimately, a complete joy. The family is instantly recognizable because they are all of us. The writing is fresh, believable. What I love about this play is what I love the most about theater – reading the play put me in a community that I knew nothing about and it was illuminated for me.”

Directing “Kim’s Convenience” is Nelson T. Eusebio III, a director, producer, and award-winning filmmaker. He is the associate artistic director at Kansas City Repertory Theatre. Nelson has directed and developed work at theaters throughout the country, including The Public Theater/NYSF, Oregon Shakespeare Festival, Baltimore Center Stage, and The Old Globe.  Nelson has been a resident artist at Ensemble Studio Theatre, Target Margin Theatre Institute, and Mabou Mines. He is a member of the Society of Stage Directors and Choreographers, LCT Directors Lab, and the Rhodopi International Theatre Collective. Nelson was a recipient of the 2009-11 NEA/TCG Career Development Program for Directors, and the Phil Killian Directing Fellowship at the Oregon Shakespeare Festival.  He is a participant in the SPARK Leadership program. Training: B.A. in Drama from UC Irvine and an M.F.A. in Directing from the Yale School of Drama.  He is a former U.S. Marine. More info at www.nelsoneusebio.com

Directing the previously announced 2022 season finale, “From the Mississippi Delta,” is Goldie E. Patrick. She is a Detroit native and proud alumna of Howard University where she is currently a professor of hip-hop theater. Based in New York City, for over 20 years she has passionately worked in and built artistic collaborations in Black theater as a playwright, director, and producer. Her approach to theater-making lives at the intersection of her work as an artist, cultural worker, and educator. She is the former founding executive director of FRESHH Inc Theatre Company for Black womxn and girls. She is also a member of the Culture Caucus at the Kennedy Center and currently the inaugural Black Creation Playwright in residence at New Federal Theatre. Directing credits include “Project 892” (New York University–MFA program), “The Halal Brothers” (Columbia University), “Foriwa” (Hedgepig Ensemble & Classical Theatre of Harlem), “Paradise Blue” (Detroit Public Theatre), and “HERstory Love Forever, Hip Hop” (John F. Kennedy Center). Associate director credits include “Between the World and Me”(Apollo Theatre) and “By the Way, Meet Vera Stark” (Signature Theatre). www.goldiepatrick.com

To insure the best atmosphere for audience and cast members alike, 2022 season plays will be consolidated to a two-week performance schedule instead of the previous three week-runs, although the musical, “Next to Normal,” will retain a three-week timeframe. Season ticket holders with third-week seating will be moved to comparable days and seating locations within the new schedule for 2022 only.

2022 Playhouse Season Is About Family

“This season our patrons will get a wide variety of human experience,” said Lamos. “The whole season is about family, every family. You can engage with these diverse families on our stage and appreciate how they resonate for you.”

Marcos Santana, director and choreographer of the Playhouse’s opening production, “Next to Normal,” added, “The Playhouse has made a conscious, artistic decision to bring stories that relate to everybody, and everybody is represented on the Playhouse stage.”

Opening the Playhouse’s 2022 season from April 5 through April 23 will be the musical, “Next to Normal,” with music by Tom Kitt, book and lyrics by Brian Yorkey, and directed and choreographed by Marcos Santana. “Next to Normal,” the 2009 Tony Award®-winning musical and winner of the 2010 Pulitzer Prize for Drama, lifts the veil on family loss and the individual responses to crisis and endurance, while pushing the boundaries of contemporary musical theater. Production Sponsor isCzekaj Artistic Productions.

“Straight White Men,” written by Young Jean Lee and directed by Mark Lamos, will play from May 24 through June 5. It’s Christmas Eve, and Ed has invited his three grown sons back to their family home for Chinese takeout, pranks, and gossip. But when an impossible question threatens the cheery festivities, they’re forced to face their own identities.

The aforementioned comedy by Ins Choi “Kim’s Convenience,” that generated a series streaming on Netflix, created and produced by Canadian Broadcasting Corporation, will run from July 5 through July 17. The News York Times named “Kim’s Convenience” as one of the best international television series of 2021 in their critics’ and editors’ roundups in December.Production Sponsor is Adam Clemens.

“4000 Miles,” written by Amy Herzog and directed by David Kennedy, Playhouse associate artistic director, will be staged from August 23 through September 4. After suffering a major loss while on a cross-country bike trip, 21-year-old Leo seeks solace from his feisty 91-year-old grandmother in her Greenwich Village apartment. Over the course of a single month, these unlikely roommates infuriate, bewilder, and ultimately find each other. “4000 Miles” was a finalist for the 2013 Pulitzer Prize for Drama, and winner of the 2012 Obie Award for Best New Play. Production Sponsor is the Eunice and David Bigelow Foundation.

The 2022 season will culminate with “From the Mississippi Delta” by Endesha Ida Mae Holland and directed by Goldie E. Patrick, from October 18 through October 30. The journey begins in Greenwood, Mississippi--the Delta--where Phelia works in the cotton fields. Her experiences inspire her to dream, sweeping her into the momentum of the civil rights movement and attending college in the north. The play won a Los Angeles Drama-Logue Award and was nominated for a Pulitzer Prize.

All titles, artists, dates, times, and formats are subject to change.

The performance schedule is Tuesday at 7 p.m., Wednesday at 2 and 8 p.m., Thursday and Friday at 8 p.m., Saturday at 3 and 8 p.m. and Sunday at 3 p.m.  (No Wed. or Sat. matinees during preview week). Special series include Taste of Tuesday, LGBT Night, Opening Night, Sunday Symposium, Backstage Pass, and others.

Virtual performances are not currently scheduled for the 2022 season, but may be initiated dependent on the pandemic’s course. For updates on Covid-19 health and safety protocols at the Playhouse, visit https://www.westportplayhouse.org/visit/covid19safety/

For more information and tickets, visit www.westportplayhouse.org, email  This email address is being protected from spambots. You need JavaScript enabled to view it. , or call the box office at (203) 227-4177, Tuesday through Friday, 12 to 6 p.m. Due to the pandemic, the Playhouse administrative offices are closed and box office staff are working from home and/or on a limited schedule. Stay connected to the Playhouse at westportplayhouse.org, on Facebook (Westport Country Playhouse), follow on Twitter (@WCPlayhouse), and on YouTube (WestportPlayhouse). Westport Country Playhouse is located at 25 Powers Court, off Route 1, Westport.

ABOUT WESTPORT COUNTRY PLAYHOUSE
The mission of Westport Country Playhouse is to enrich, enlighten, and engage the community through the power of professionally produced theater worth talking about and the welcoming experience of the Playhouse campus. The not-for-profit Playhouse provides this experience in multiple ways by offering live theater experiences of the highest quality, under the artistic direction of Mark Lamos; educational and community engagement events to further explore the work on stage; the New Works Initiative, a program dedicated to the discovery, development, and production of new live theatrical works; special performances and programs for students and teachers with extensive curriculum support material; Script in Hand play readings to deepen relationships with audiences and artists; the renowned Woodward Internship Program during the summer months for aspiring theater professionals; Family Festivities presentations to delight young and old alike and to promote reading through live theater; and the beautiful and historic Playhouse campus open for enjoyment and community events year-round. Charity Navigator has recently awarded its top 4-star charity rating to the Playhouse in recognition of its strong financial health and commitment to accountability and transparency.