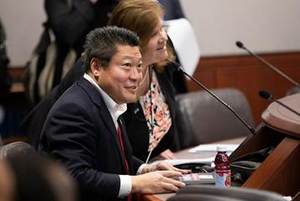 Governor Lamont's vision is based on additional tax revenue to fund infrastructure improvements by instituting electronic tolls rather than looking for structural savings, cost efficiencies and project prioritization. Hwang disagreed with creating the new mileage tax and insisted on using prioritized bonding under a debt diet and exploring innovative public private partnerships to invest in Connecticut’s infrastructure without creating new taxes on Connecticut residents.

Senator Hwang further emphasized the Democratic legislative leadership and Gov. Lamont’s complete lack of a definitive plan on how tolls could be implemented, remarking that “The current sense of urgency to vote on tolls is literally putting the cart before of the horse.”

Senator Hwang raised the concern of the lack of “public trust” that toll revenue will be used only for infrastructure/transportation improvements. He cited examples of the imposition of the income tax over 25 years ago, the gas tax for transportation, and lottery taxes purportedly intended for education - all of which were dedicated for specific purposes but ended up feeding insatiable spending from the general fund.

Recently, Governor Lamont’s proposed biennium budget flip flopped on his campaign promise of truck-only tolling. His budget also swept millions from the car sales tax funds specifically allocated to stabilize the Special Transportation Fund (STF). This flies in the face of the spirit of the Transportation Lock Box that voters ratified during the 2018 election and further reinforces the public belief that state government cannot be trusted with additional tax revenue from tolling.

“This is a mileage tax, plain and simple. Unlike other states, CT is not looking to toll specific infrastructure projects, such as a bridge or tunnel. Rather, it sprawls toll gantries all over the state, taxing you for how many miles you drive. The federal government has even described Lamont’s mileage-based toll proposal as ‘new territory,’ unlike any other state’s approach to tolls,” said Senator Hwang.

You can find a clip of Senator Hwang’s exchanges with DOT, DECD, OPM Leadership during the Public Hearing here: HWANG TRANSPORTATION CT-N