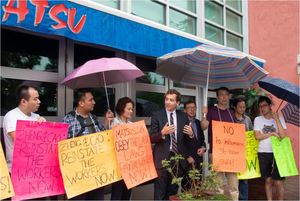 Today, State Senator Will Haskell (D-Westport) joined a protest outside Westport restaurant Matsu Sushi in response to the restaurant owners’ non-compliance with court orders requiring the reinstatement of two workers fired for refusing to work what organizers referred to as a “36-hour shift.”

The dispute, ongoing for two years, started when Jianming Jiang and Liguo Ding, who both have worked at the restaurant for over a decade, refused in December 2017 to work three consecutive shifts over two days that would take place over a total of 36 hours. Despite multiple rulings from the National Labor Relations Board for the workers to be rehired and for back wages and owed deposits to be paid back to them, the restaurant’s owners have not complied. Protestors called for Matsu Sushi to follow the law and comply with the court orders.

“As a State Senator, I spend most of my days thinking about, and fighting for, what the law should be,” said Sen. Haskell. “Today’s fight is different. We’re fighting about whether the law should be followed. Living in a society with a rule of law means we all abide by a set of principles that protects us from harm. Well, these workers have been harmed. I’ve sat with them and met with them; they were deprived of dignity and respect. Judge Kenneth Chu ruled in October 2018 that they were wrongfully terminated and deserved reinstatement. On June 28, the NLRB reiterated their position that these workers were not treated fairly and deserve reinstatement.”

“It breaks my heart to be here today,” Sen. Haskell continued, “not just because these workers were denied dignity and respect but because I love Matsu Sushi. When I grew up here in Westport, this was a staple for my family. But the sad reality is we cannot continue going here if they continue to mistreat their workers. Here’s my message to the owners: listen to the NLRB, reinstate these workers and I will be the first in line for a table. To Westport residents: please do not break the picket line. Instead, get to know these remarkable men whose rights were violated. If you work in Westport, you are a part of this town and we care about how you are treated.”

“Ding and I, back in 2017, were fired illegally because we refused to work a 36-hour shift,” said Jiang. “In 2018, the NLRB said the owners violated the law and ordered for us to be reinstated and compensated for lost wages. The boss not only didn’t admit his mistake but chose to appeal. After a year of waiting, we won the appeal, and courts ordered the boss to reinstate us within 14 days, but again the boss ignored the court order. Until today, we have not heard from them. Enough is enough. We ask the community to continue to boycott the restaurant until the boss admits his mistake and reinstates Ding and I.”

In addition to Jiang and Ding, four additional chefs from Matsu Sushi joined the protest. Jiang said all of them made deposits to Matsu and were promised they would be repaid, but the boss refused to pay any of them back after one employee left the restaurant.

Caption: State Senator Will Haskell joins protestors Tuesday afternoon in Westport, standing with them in opposition to Matsu Sushi’s non-compliance with legal orders made by the National Labor Relations Board.