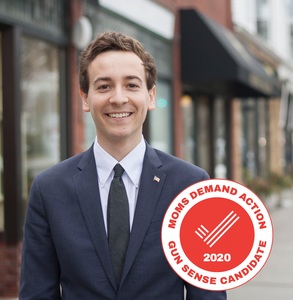 Moms Demand Action, a grassroots movement of Americans fighting for public safety measures to combat gun violence, awarded State Senator Will Haskell their “Gun Sense Candidate Distinction” this week. The distinction is a signal to supporters, volunteers and voters across the country that a candidate stands for gun violence prevention and will govern with gun safety in mind, if elected.

“While the NRA has prevented meaningful reform on the federal level, I’ve fought alongside survivors and activists from Moms Demand Action to fight for new laws that will save lives. Connecticut has set an example for the rest of the country, demonstrating that what works here could work everywhere,” said Haskell.

In 2019, Haskell co-sponsored three new pieces of legislation to combat gun violence in Connecticut. The first was a ban on “ghost guns,” which are unregistered guns without serial numbers that can be made with separate parts ordered online. The second was “Ethan’s Law,” named after a Guilford, CT resident who was killed in an accident involving an unsecured gun, which mandates the safe storage of firearms in the home. The third was legislation outlining how firearms are to be stored inside of private vehicles.

Haskell is currently the only candidate running for the 26th District State Senate seat to receive a Gun Sense Candidate Distinction.

Will Haskell is running for re-election to the state senate in the 26th district of Connecticut, which includes portions of Westport, Ridgefield, Wilton, Redding, Weston, Bethel, and New Canaan. For more information about Will’s campaign and to volunteer to help, please visit WillHaskell.com.