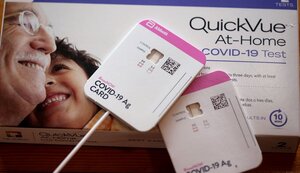 Governor Ned Lamont today announced that the State of Connecticut has distributed a total of 3.1 million COVID-19 self-tests over the last two weeks, with about 1 million distributed in the last two days alone.

Since December 31, 2021, the state has delivered the following amounts:

Governor Lamont said that his administration anticipates receiving deliveries in the coming days of thousands more self-tests that it has ordered, and the state will continue distributing them as they arrive in Connecticut.

“We have so many partners working together to obtain, deliver, and distribute these self-tests, and I could not be more grateful to all of the groups involved for working together and getting these out to the residents of Connecticut as quickly as possible,” Governor Lamont said. “I am certain that Connecticut currently has one of the largest self-test distributions of any state in the northeast, and I’m appreciative of everyone’s cooperative efforts.”