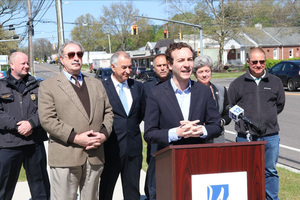 Approved at the State Bond Commission's March 30 meeting, the $11.7 million in funding will go toward traffic operational improvements on Route 1. Most prominently, the work will involved adding exclusive left turn lanes at three major intersections along Route 1, including at the Fresh Market/Village Center intersection, the intersection of Roseville and Hillspoint Roads and Bulkley Road North and South. A two-way left turn lane will also be added from the Fresh Market/Village Center driveways to Roseville and Hillspoint Roads, allowing vehicles to make left turns into commercial driveways.

The work will also align the offset intersection at Bulkley Avenue, North and South, for improved traffic operations, with new traffic signals, bus shelters, curbing, curb ranks, sidewalks and crosswalks proposed for installation in the area. Traffic signals will be optimized for current traffic conditions and the sidewalks and curb ramps will meet Americans with Disabilities Act criteria.

The project is expected to begin construction in Fall 2022 with anticipated completion Fall of 2025.

"On the average day, 24,000 cars travel Westport's Post Road. It’s time we make this major roadway more safe and efficient for drivers, pedestrians and those who ride the bus," said Sen. Haskell. "Anyone who travels on this road knows that bumper to bumper traffic is a daily occurrence, and accidents are all too common. Much of that traffic and many of those accidents can be avoided with a little bit of investment, including traffic signals that can sense how many cars are coming and are responsive to the flow of traffic. We also know pedestrians frequently cross the Post Road, which is why this project invests in critically important sidewalks and crosswalks. Finally, this road is home to one of Connecticut's most-utilized bus services, the Coastal Link. Unfortunately, too often the folks waiting for these buses are left braving the rain or cold. I’m so grateful for all of the advocacy to make sure bus shelters were included in this project.”

"We are planning a project starting around Westport Plaza continuing down to Post Road to the intersection in front of Fresh Market," said First Selectwoman Tooker. "Anything we can do to improve this corridor from a traffic and pedestrian safety standpoint is thrilling. It's an excellent project for the town of Westport and we're grateful to the state, the DOT and our state Senator and Representative for their hard work."

"All politics is local, but all transportation projects are really local," said Rep. Steinberg. "We see the big projects integrated statewide, but these projects are where it really makes a difference to people, as it affects safety and quality of life. I've been driving on Roseville Road since I got my driver's license; I can tell you having a turn lane there will have a significant difference for people right here in Westport. It's a project that's practical, long-needed and why infrastructure investment is so important in every community, just like this one."