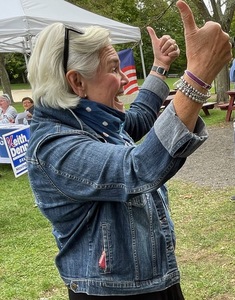 When Senator Will Haskell announced that he would be leaving his seat as State Senator in the 26th District of Connecticut to pursue a law degree at NYU Law School, a question arose.  Who would he leave his seat to?​ Certainly not Toni Boucher whom he defeated in his first campaign in 2018.

Enter Ceci Maher, former Executive Director at Sandy Hook Promise and Person-to-Person and please find out more about her on her website at cecimaher.com​. Will chose wisely. And on her website, you will see her endorsements, her story, and the issues that she will be focusing on when she becomes Senator Ceci Maher.

The choice is clear - either we continue on the forward progress path that Senator Haskell has paved for us or we put the car in reverse and endure years of "No" from a Republican woman who is totally out of step with the future of Connecticut.

As of now, the State of Connecticut is in excellent hands with a very able and caring governor and a functioning Legislature. We want and need Ceci in Hartford to be part of the energetic and intelligent Democratic leadership. VOTE FOR CECI MAHER FOR STATE SENATOR