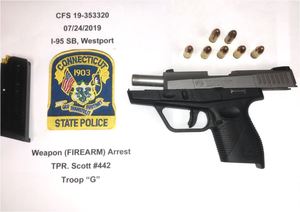 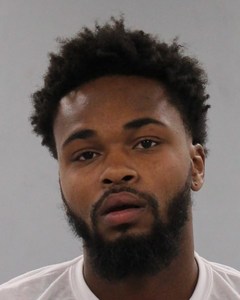 Yesterday, Wednesday, July 24, 2019 at approximately 2:30 a.m., Troopers out of Troop G-Bridgeport came upon a disabled motor vehicle in the median of Interstate 95 Southbound, Exit 18, in the Town of Westport.

Troopers quickly discovered that the Connecticut registration plate displayed on the rear of the vehicle came back to an entirely different make and model. The vehicle was occupied by two males who stated that they had run out of gas. The operator of the vehicle, who was later identified as Leonard McNair (D.O.B: 01-22-1997), provided Troopers with an identification card which belonged to another person.

During the course of the investigation, it was discovered that McNair was in possession of a 9mm Handgun.

McNair was subsequently arrested and charged with Criminal Possession of a Firearm, Carrying a pistol without a permit, Criminal Impersonation as well as various other charges. McNair was then transported to Troop G. McNair appeared at Norwalk Superior Courthouse today for the charges related to this incident.

Great job to the Troopers out of Troop G.