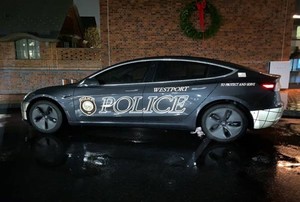 The Town of Westport is pleased to announce the newest addition to its Police Department fleet – the fully electric 2020 Tesla Model 3. The 310-mile range electric vehicle has been delivered and is currently in the process of being outfitted with all the necessary police equipment – including emergency lights and siren, a networked computer, a weapon rack and tires capable of sustained speeds of over 100mph. The Police Department is working in partnership with Whelen Engineering Company who will be supplying all the emergency equipment and Fleet Auto Supply who will be outfitting and installing all the equipment to get the vehicles fully operational by the last week of January 2020.

When asked why he chose the Model 3, Police Chief Foti Koskinas says he “believes in being green” but was primarily impressed by the superior performance, 5 star crash ratings, and industry-leading collision avoidance technology available in the Model 3 compared to the Town’s typical squad cars. The Police Department has no plans to use the Autopilot feature, as it’s not relevant for the type of driving they will be doing.

While the initial purchase price of $52,290 was higher than the $37,000 the department would normally spend on adding another Ford Explorer to the fleet, Koskinas expects to more than makeup for that in fuel and maintenance savings over the life of the vehicle. Just in the first 3 years, an internal combustion engine squad car typically requires approximately $11,000 in maintenance, including oil changes, oil filters, tune ups, and brakes. In contrast, Teslas don’t require annual maintenance and have brakes that last 70,000 miles or more, benefiting from a regenerative braking system that uses a motor to simultaneously slow the car down while recharging the battery.

The savings on gasoline compared to electricity are significant as well. Using the US Department of Energy’s fuel economy calculator, the Police Department’s energy cost for the Model 3 per mile will be $0.040, while the fuel cost for a Ford Explorer is $0.127 per mile, adding up to a fuel savings of $13,770 just in the first 3 years.

Charging the battery won’t be an issue, as the typical daily mileage of the Tesla is expected to be less than 150 miles, and the official mileage rating for a Model 3 is 310 miles. Given the way the vehicle will be used day to day, maximum range is expected to be between 200-220 miles. The Police Department already has a gas pump on its property, and now will be adding a Level 2 electric vehicle charger which will easily recharge the vehicle in a few hours overnight so it has a full charge each morning. There are also EV chargers available to the public at other Westport locations such as the Library, Town Hall, and both train stations.

According to Barry Kresch, a member of the Leadership Team of the EV Club of Connecticut who analyzed the state’s DMV data, this vehicle will join a fleet of 431 electric vehicles already owned by Westport residents, of which 250 are Teslas. In fact, Westport is #1 per capita in Connecticut in both Tesla ownership and EV ownership overall. (Data as of July 1, 2019, obtained via FOIA from the DMV.)

EV Club President Bruce Becker commented, “The economic, environmental and public health benefits of electric vehicles are irrefutable, and it is exciting to see the Town of Westport reaping these benefits. It’s logical for those responsible for public safety to lead the effort in keeping the planet safe by reducing dangerous pollutants and emissions, 38% of which come from the transportation sector. As the first Police Department on the east coast we know of to add a Tesla squad car to its fleet, Westport is now a national leader in the urgently needed transition to EVs.”

Sustainable Westport Advisory Team Chair David Mann said, “We’re excited by this opportunity to help drive awareness and understanding of electric vehicles across our community. Our Town’s goal is to get to Net Zero waste, water, and energy by 2050*. According to the Department of Energy, driving an electric vehicle that’s been charged on Connecticut’s grid produces only 21% of the total emissions that would occur from driving a gasoline-powered car. Electrifying our transportation sector is a critical part of helping the Town reach its goals.”

A few other electric vehicle benefits that are relevant to police usage:

● The Model 3 has an extra trunk in the front of the vehicle where an internal combustion engine would usually be, affectionately called “the frunk” by the Tesla community, where officers will be able to store emergency equipment that’s important to be kept separate from cargo in the rear trunk.
● Every Tesla comes straight from the factory with many features installed in the car – like its front, side, and rear-view cameras – that a police department would typically need to install at extra cost. These cameras can also be used in “Sentry mode” to monitor the vehicle and vicinity when the vehicle is parked. Chief Koskinas is in direct conversations with Tesla to work on potential ways to leverage the car’s existing systems to better meet the needs of a police force.
● For those very rare occasions when it is both safe and necessary to do so, the all wheel drive Model 3 is capable of reaching 60 mph in 3.2 seconds and it has a top speed of 162 mph, outperforming all other vehicles in the Police Department’s current fleet.
● Police cars can spend lots of time idling, as they need to keep the internal combustion engine running to power the lights and keep online computers running properly while not draining the battery. In any fully electric car, the tailpipe emissions from those long sessions spent parked will be eliminated. With Fairfield County’s air quality being among the worst in the country, eliminating emissions during idling is important.

First Selectman Jim Marpe commented, “I’m very proud of the steady progress that Westport is making towards our Net Zero by 2050 goal, and the leadership role we continue to play in sustainability. Whether it’s adding more solar panels on our library and school roofs, or eliminating single use plastics in food establishments, or now as we continue the transition of our municipal vehicles to electric vehicles.”

This actually isn’t the first EV for Westport’s Police Department. The first Toyota Prius arrived in 2007 and replaced a car that was burning 7-9 gallons of gasoline every day. The current model Prius is a plug-in hybrid, but operates almost exclusively in electric-only mode for its daily driving needs. The Town’s efforts to renewably electrify transportation go back to 2012 with the addition of solar-powered electric vehicle chargers at the Saugatuck train station.

The Westport Police Department will be planning an Open House in the spring so members of the public can come see the vehicle in person and learn about how it’s been helping the Police Department better serve the community.