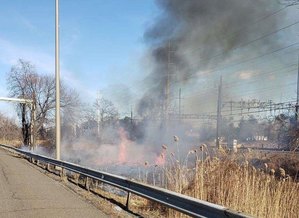 This afternoon, the Westport Fire Department along with mutual aid from Fairfield responded to three separate large brushfires along I-95 simultaneously.

The first report came in as southbound at exit 18 and received a two-engine response with the Shift Commander. A third engine was requested to respond to the area based on the size and terrain. While fire units were responding to the first call, they came across a second fire on the northbound side of the highway just prior to exit 19. The third responding unit was diverted to this fire. A fourth engine was requested to the commercial property adjacent to the first fire due to the difficult terrain.

Westport was also operating at a motor vehicle crash on the Merritt Parkway at the time and had no additional units available. Fairfield responded to and extinguished the third fire. The Fire Marshal’s Office was notified and responded to the scene. There has not been a determination of cause at this time.

Motorists are advised not to discard any material from their vehicle that may ignite roadside brush.