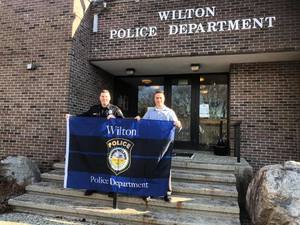 Last year, Lt. David Hartman and Lt. Rob Kluk of the Wilton Police Department made a commitment to raise funds for Special Olympics by climbing a mountain. And, not just any mountain. The officers head to Africa to scale Mt. Kilimanjaro on Monday.

Since the news broke that Hartman and Kluk were embarking on this courageous adventure, community members including Wilton High School students came to their support, raising funds on their behalf. WHS students designed a t-shirt that they sold to the school and wider communities to raise funds. In addition, Hartman and Kluk were honored with a Salute to Excellence award from the BOE.

Wilton Police wrote on their Facebook Page, "Looking forward to seeing the Wilton PD flag on the summit of Mt. Kilimanjaro next week. Wishing LT Kluk and LT Hartman safe travels as they set off for #copsconqueringKilimanjaro."

You can follow their trek in the Facebook group Cops Conquering Kilimanjaro for a Cause. Good luck gentlemen!