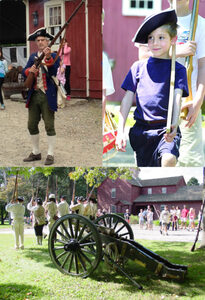 Get into the Fourth of July Spirit with Fire and Ice Ice Cream Social at the Wilton Historical Society on Thursday July 1, 3:30 – 5:00

Co-sponsored by DAR and C.A.R.

On Thursday, July 1 from 3:30 – 5:00 the Wilton Historical Society Museum Complex will be buzzing with a fun event perfect for kids, families, and new residents -- the “Fire and Ice” Ice Cream Social is great way to get into the Fourth of July spirit. Docents in Colonial attire will demonstrate all manner of Colonial activities, from firing Revolutionary War style muskets to spinning and blacksmithing. Kids can try their hands at spoke shaving, weaving, and flax-breaking. Enjoy the Ice Cream Social courtesy of the Drum Hill Chapter Daughters of the American Revolution and Captain David Hawley Betts Society Children of the American Revolution (C.A.R.). Learn about the Verbruggen Cannon, an exact reproduction of a 1776 artillery also known as a “Grasshopper” and find out how it was loaded and fired (it needed six men!).

The Wilton Historical Society will also debut a new exhibition: “Rebels and Redcoats: The Aftermath of the Battle of Ridgefield”. The highlight is an extraordinary Revolutionary War document, a letter dated April 26, 1777 between General Selleck Silliman and Major General David Wooster, which may be the last letter sent by General Wooster before he was killed the next day at the Battle of Ridgefield. The exhibition will be accompanied by a new “History is Here” video by Associate Curator Nick Foster.

Drum Hill Daughters of the American Revolution (DAR) will hold a Patriot look-up session at the ice cream social. Experienced genealogists will be on hand to help you discover your patriotic roots. You may have a male or female ancestor who assisted in the Revolutionary War. Perhaps your ancestor fought; provided food, clothing, shelter; or signed an oath of allegiance. There were many ways to be a Revolutionary War Patriot. Also on hand – members of the Captain David Hawley Society of the Children of the American Revolution (C.A.R.). Discover your history!