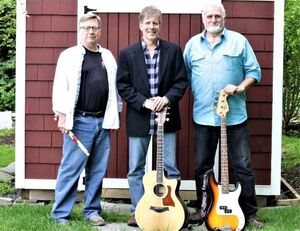 Weekly concerts take place on Thursday evenings in July, with trio Over Easy kicking off the series

Wilton Library is pleased to announce the return of its annual Summer Music Concert Series. The opening concert featuring the Fairfield County-based pop-rock trio Over Easy takes place on Thursday, July 7, from 5 to 6:30 p.m.

The concerts will continue throughout the month of July on Thursday evenings, July 14, 21 and 28, from 5 to 6:30 p.m. with live performances that feature music spanning all decades from the ’40s on. For the twentieth year, Village Market is sponsoring the library’s four-part concert series.

“It’s our pleasure to once again sponsor Wilton Library’s Summer Music Concert Series,” said Tim Dolnier, co-owner and President of Village Market. “As usual, the library has organized a great line-up of performances for the town to enjoy, and we’re thrilled to be a part of it.”

Kicking off the library’s concert series is the popular trio Over Easy. The band performs on July 7, covering music from the ‘50’s, the British Invasion era, and early ‘70’s classics that are often forgotten. Over Easy was founded by bass player and singer Steve Cinque from Stratford. Drummer Jim Zembruski from Easton joined and recommended singer, pianist, and guitarist Mark Holleran from Trumbull, who was an old high school friend. The musicians receive rave reviews for their ability to cater their sound to their listeners and their fun, laid-back style that invites audience participation.

Next, the very popular Echoes of Sinatra performs on July 14 at the library. An absolute crowd-pleaser, Echoes of Sinatra presents the vocal stylings of Steve Kazlauskas with Chris Martirano on keyboard, Tony Traina on drums, and Keith  Gurland on horns, paying homage to the legendary Frank Sinatra. This show delivers
songs and stories about the iconic performer.

These Wilton Rocks for Food favorites will play a set of recognizable popular songs designed to have everyone dancing and singing along. Long time veterans of the local music scene, the band has played together since 2015. Come enjoy some great music by local talent!

The finale of the concert series brings Billy &amp; the Showmen back to the library on July 28. Established more than fifty years ago by band leader Billy Frenz, Billy and the Showmen has earned its reputation as one of Connecticut's most enduring Rhythm & Blues bands.

For more than five decades, the band has thrilled audiences across the Northeast with hard-driving soul, and funk from the 60s and 70s.

Thanks to the Village Market, the concerts are free and open to the public, with free snacks and refreshments. Wine is generously donated by Janet and Michael Crystal. The concerts take place rain or shine in the Brubeck Room. Concertgoers can sit indoors or enjoy lovely summer evenings in the Brubeck Courtyard with the bands in full view.

There is no registration required; first come, first served. Attendees can pop in for a few minutes or stay and appreciate the full performances.

Wilton Library is located at 137 Old Ridgefield Road in the heart of Wilton Center.