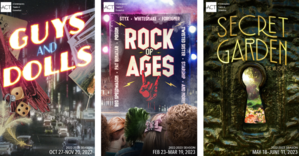 Purchase individual tickets or a Season Package (and save) HERE.

The season will mark the theater’s fifth season and will include the Golden-Age classic comedy GUYS AND DOLLS, the smash-hit jukebox musical ROCK OF AGES, and the breathtaking Tony Award-winning THE SECRET GARDEN!

ACT of CT’s Artistic Director, Daniel C. Levine says, “This is going to be such an incredible season at ACT of CT and I can’t wait for our audiences to see what we have in store for them with our upcoming GUYS AND DOLLS, ROCK OF AGES, and THE SECRET GARDEN. These are three of my favorites and I can’t think of a better selection of shows to include in our fifth season here at ACT of CT!”

A Musical Fable of Broadway

Based on a Story and Characters of Damon Runyon

Music and Lyrics by Frank Loesser

If you THINK you know GUYS AND DOLLS, think again! In typical ACT of CT fashion, this GUYS AND DOLLS will be unlike any other production of the show that you have ever seen before!  Directed by ACT of CT’s Artistic Director (and director of such ACT of CT hits as Mamma Mia, Evita, Godspell, and Jesus Christ Superstar) Daniel C. Levine, this Golden-Age classic musical comedy promises to be a smash hit!  Set in Damon Runyon's mythical New York City, GUYS AND DOLLS follows the unlikeliest of Manhattan pairings: a high-rolling gambler and a puritanical missionary, a showgirl dreaming of the straight-and-narrow and a crap game manager who is anything but. With its score of unforgettable songs including "Luck Be a Lady", "Sit Down, You're Rockin' the Boat", and “I’ve Never Been In Love Before”, ACT of CT’s sultry production of GUYS AND DOLLS will be all Aces!

Arrangements and Orchestrations by Ethan Popp

Did someone say “1980’s”?!?!? ROCK OF AGES takes you back to the time of big bands with big egos playing big guitar solos and sporting even bigger hair! This five-time Tony Award-nominated Broadway hit will transport you back to a simpler time – 1987! Featuring 80’s rock hits like “We Built This City”, “We’re Not Gonna Take It”, “Here I Go Again,” “Hit Me With Your Best Shot”, “Sister Christian”, “Every Rose Has Its Thorn”, and “Don’t Stop Believin”, ROCK OF AGES is a non-stop party that will have you rock and rollin’ all night long!! (or at least until the curtain goes down…). ROCK OF AGES takes place on Hollywood’s Sunset Strip and follows Stacee Jaxx, aspiring rock star Drew, and small-town girl Sherri, as developers sweep into town with plans to turn the fabled Strip into just another capitalist strip mall. Can Drew, Sherri and the gang save the strip (and themselves) before it's too late?

Book and Lyrics by Marsha Norman

Based on the novel by Frances Hodgson Burnett

This enchanting Tony Award-winning musical (based on the famous 1911 novel) possesses one of the most glorious scores ever to hit Broadway. THE SECRET GARDEN is a family-friendly, yet extremely sophisticated production that tells the story of eleven-year-old Mary Lennox, orphaned in India, and her return to Yorkshire to live with her reclusive uncle Archibald and his son Colin. The estate's many wonders include a magic garden that beckons Mary with haunting melodies and the spirits from her past who guide her through her new life. ACT of CT’s production of THE SECRET GARDEN is one of the most highly anticipated shows of the 2022/2023 season. Don’t miss the musical that Time Magazine called “elegant and entrancing…the best American musical of the Broadway season.”

2022-2023 Season Subscriptions are now available for purchase. Visit actofct.org to purchase and to view all of the exclusive Subscriber benefits. Subscriber benefits include: First choice of dates and seats; exclusive savings on tickets, at theater concession and ACT of CT merchandise; complimentary exchanges; concierge box office support and advance notification of special events such as our one-night-only Broadway Unplugged series, and more!

ACT of CT’s mission is to elevate the level of entertainment in Fairfield County and to foster a sense of community through the arts by producing exceptional theater and encouraging an environment of inclusivity and artistic excellence. ACT (A Contemporary Theatre) of Connecticut is a nonprofit 501(c)(3) professional theatre located in Ridgefield, CT. Founded in 2018 by Katie Diamond, Daniel C. Levine and Bryan Perri, and along with the more recent addition of R. Erin Craig, ACT of CT presents limited engagement runs of well-known musicals, as well as world-premiere productions by the next generation of writers and composers. In addition to fully produced mainstage productions, ACT of CT’s programing also includes a New Works Series, a Broadway Unplugged Series, and an extensive theater education program. With its 182 seats and turntable stage, the theater offers an intimate, unique, and immersive theatrical experience for its patrons. Given the proximity to New York City, ACT of CT has access to top theatre talent and professionals. In just four seasons, ACT of CT has become one of the most well-known and highly respected regional theatres in the area, and received a Grammy nomination for Best Musical Theater Album for the cast album of their 2021 production of Stephen Schwartz’s "Snapshots". ACT of CT is an Equal Opportunity Employer dedicated to inspiring, creating, and nurturing a culturally diverse and equitable environment for its staff, creative teams, cast, musicians, crew members, and audiences. ACT of CT does not discriminate in matters of employment, recruitment, admission or administration of any of its programs on the basis of race, color, creed, religion, sexual orientation, national or ethnic origin, disability, gender, gender identity, gender expression, or genetic information. ACT of CT is committed to achieving a diverse workforce and to maintaining an inclusive and discrimination-free environment.

ACT of CT is located at 36 Old Quarry Road, in the beautiful village of Ridgefield, CT.  Visit actofct.org to learn about all of ACT of Connecticut’s programs.