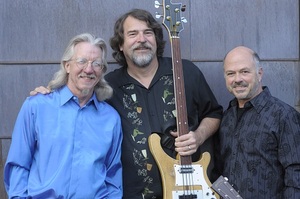 Wilton Library is pleased to announce the return of its very popular Hot & Cool Jazz series, bringing world-class jazz concerts to the Brubeck Room stage. The opening concert featuring Chris Brubeck’s Triple Play is on Thursday, September 1 at 7 p.m. Hot & Cool Jazz is brought to you by the generosity of the Estate of James (Tom) and Alice Brown.

“We are so delighted to bring back our Hot & Cool Jazz series. These are very special events in our programming lineup, and we know that our patrons have missed these concerts very much,” said Caroline Mandler, Executive Director of Wilton Library. “This fall, concertgoers can enjoy these wonderful performances by award-winning jazz musicians, and they all take place right here in Wilton. I can’t think of a better way to kick off the season than with a concert featuring the library’s dear friend and supporter, Wilton’s own Chris Brubeck, in Triple Play.”

Triple Play’s musical roots go way back (50+ years!) in each member’s history. Chris and Madcat have toured and recorded together in different settings since 1969, first as young rock musicians in the group “New Heavenly Blue” (with albums on RCA and Atlantic Records), “Sky King”(on Columbia), and then as jazz musicians touring the world with Dave Brubeck. Paul deBarros, writer for The Seattle Times and Downbeat, commented after seeing a performance at the Monterey Jazz Festival: “Triple Play is what jazz always was and always should be about: good-time rhythm, unbridled joy and the sweet release but bittersweet aftertaste of the blues."

Dave Brubeck’s last recorded performance was captured on the exciting “Triple Play Live at Arthur Zankel Music Center.” The crowd is wildly enthusiastic on this well-reviewed CD, which also featured Joel Brown’s father, Frank Brown on clarinet. You can often hear this innovative version of “Take Five” featuring Madcat’s polyrhythmic jaw harp and burning solos by Dave, Joel and Chris on Sirius XM Jazz. Triple Play’s music has international reach, as they were a hit playing with The Singapore Chinese Orchestra and returned for a second performance which was recorded and released on Blue Forest Records. “It all fits together because of the talent and taste of the musicians, who groove no matter what they're doing—and it's tremendous fun, to boot,” said All About Jazz.

For the next concert in the series, the Jerry Bergonzi Quartet takes the stage on Sunday, September 18 at 4 p.m. The band features Jerry Bergonzi on tenor sax, Harvie S on acoustic bass, Bruce Barth on piano, and Jason Tiemann on drums.

Jerry Bergonzi is a tenor saxophonist, composer, author and educator who was introduced to the world of jazz by one its legends – Dave Brubeck. In the 1970s, he toured with the Two Generations of Brubeck band that featured Dave and the three Brubeck sons: Darius, Chris, and Dan. Later in that decade, he also held the sax chair in the Dave Brubeck Quartet. On the faculty of the New England Conservatory for the last 20 years, Jerry teaches improvisation in ensemble settings as well as one-on-one. He still plays two weekly gigs in the Boston area and tours 130 days a year playing his own music.

Harvie S is back in the Brubeck Room for his seventh performance - most recently in 2019 with Alan Broadbent. Harvie is an award-winning bassist, educator, composer, arranger, and producer. He has played with many of the biggest names in jazz, and has performed in a wide variety of jazz festivals around the globe as well as in such venues as The Blue Note, The Iridium, and the Kennedy Center.

Jason Tiemann is a New York City-based jazz drummer, where he maintains a busy schedule as a freelance performer and educator. Admittedly drawing influence from the greats Philly Joe Jones, Tony Williams, Elvin Jones, and Billy Higgins, Tiemann is quickly forging his musical voice on the New York scene by fusing his depth of historical foundation with crisp technique and propulsive, intuitive swing.

Jazz pianist and composer Bruce Barth has been sharing his music with listeners the world over for more than two decades. Bruce has performed on over one hundred recordings and movie soundtracks.  He is equally at home playing solo piano, leading an all-star septet and composing for a variety of ensembles.  He has performed with James Moody, Art Farmer, Phil Woods, Tony Bennett, Branford Marsalis, and Wynton Marsalis among many others.

Advance registration strongly recommended. Register online or call 203-762-6334. Suggested donation: $10. Each registration is for one name only; please remember to separately register each member of your party. Pre-registrants should arrive at least 10 minutes before the start of the concert to be guaranteed seating; wait-listed and walk-in registrants will be admitted if space is available. Following each concert, there will be a reception with CDs available for sale and signing.

Wilton Library is located at 137 Old Ridgefield Road in the heart of Wilton Center. For more information, please visit www.wiltonlibrary.org or call (203) 762-3950.