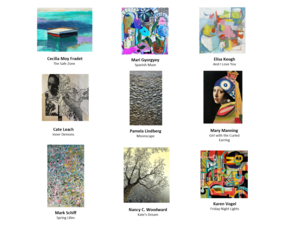 Wilton Library is pleased to present the dramatic and colorful works of “The Art of Firing Circuits Studios” in its September art exhibition, opening on Friday, September 9 with a reception from 6 to 7:30 p.m. Firing Circuits Studios is a collective of diverse, well-known working artists with studios located in a brick century-old factory building in Norwalk. Nine artists from the group will be exhibiting their works in an array of styles, media choices, and subject matter. The artists are: Cecilia Moy Fradet (Norwalk), Mari Gyorgyey (Stamford), Elisa Keogh (Norwalk), Cate Leach (Darien), Pamela Lindberg (Darien), Mary Manning (Darien), Mark Schiff (Norwalk), Nancy C. Woodward (Norwalk), and Karen Vogel (Darien). The reception is free and open to the public.

“Firing Circuits Studios is an exciting group of talented artists, and we are thrilled to welcome them back to the library after the pandemic. This will be the group’s third exhibit here, and we know that there will be some very large and colorful works on the walls. We can’t wait to share their latest work with our community,” said Ed MacEwen, Art Chairman of Wilton Library.

The artists of Firing Circuits Studios come from a range of backgrounds:

Cecilia Moy Fradet is constantly creating and curating ideas for her projects to come. Born in Hong Kong and raised in Lower Manhattan, Cecilia was fascinated by the differences in what people perceived as interesting, beautiful and even what’s good or worthy. Art has always been in Cecilia’s life. She was drawn to art at an early age, as her grandfather was a painter of Chinese landscapes and her father was a calligrapher. She graduated with a fine arts degree then had a second career as a fashion designer. Cecilia is currently a mixed media artist and has a studio at Firing Circuits in Norwalk, Connecticut. She is a member of the Silvermine Guild Arts Center, a member of the Artist Collective of Westport, and an educator at Aldrich Contemporary Art Museum. Ceciliamoyfradet.com.

Mari Gyorgyey is best known for her nonlinear narrative art, which flows into book arts, pen and ink drawings, paintings, computer imagery, and fine art etchings. She is not afraid to mix any of the techniques to communicate her theme. Her quirky and satirical drawings has been compared to Philip Evergood, and William Kentridge and the pre-war drawings of George Grosz. Since earning her BFA from Rhode Island School of Design, and MFA from University of Pennsylvania, Gyorgyey has shown her work domestically and internationally with solo shows in Tapio Gyorgy and Budapest, Hungary, as well as Stamford, CT. She has won printmaking awards from the University of Pennsylvania, Dharma Silk Company, and the Center for Contemporary Printmaking, where she is a longtime member. Mari investigates the conflicts and harmonies from Hungárián communities and she explores what it is like to have two identities vying for dominance. Mari’s work integrates her fine art and textile design background. Her content is strongly influenced by living in communist Hungary and suburban America. Marigyorgyey.com

Elisa Keogh grew up in the U.K. and arrived in the United States at age 19 to follow her dream of working at a New York City advertising agency. After studying graphic design at the School of Visual Arts and Parsons School of Design in New York City, she enjoyed a successful career as a commercial artist (advertising and later the music industry) and formed her own studio, SeeHear Design. She moved to Connecticut and shifted her focus to fine art photography. For almost two decades, Elisa has exhibited her experimental photographs throughout the United States and abroad, and has been honored with significant recognition for her work. During the pandemic, she began devoting more time to painting in acrylic paint, mostly on canvas. Elisakeogh.com.

Cate Leach is an award-winning artist whose style is distinguished by a love of line, a sensitive appreciation for composition, and the awareness that resolution often comes by eliminating the nonessential. Having spent many years as a dancer with George Balanchine and the New York City Ballet, Leach finds inspiration and meaning in subtle gestures and an economy of form. Leach’s paintings, prints and assemblages have been exhibited at museums and galleries throughout New York and Connecticut, including Lyman Allyn Art Museum, Housatonic Museum, Sacred Heart University in CT, the Flinn Gallery in Greenwich, CT, and in NY at LaGuardia Airport and the Prince Street Gallery. She is a member of the Silvermine Guild of Artists (New Canaan, CT), The Concepts Group (Darien, CT), the Center for Contemporary Printmaking (Norwalk, CT) and Connecticut Women Artists. Leach maintains a studio at Firing Circuits in Norwalk, CT. Cateleach.com.

Pamela Lindberg was trained as a Surface Pattern Designer and has, for the last 35 years, pursued her interests in painting, printmaking, photography, and most recently, encaustics. She has exhibited in numerous juried shows and has won a number of awards. A love of nature is a recurring theme in her art. She also has a love of textures and unique materials and techniques.

Mary Manning is a visual artist who works with diverse media and processes, always experimenting with new materials. She has evolved her practice to include expressive and organic abstract ink paintings, alongside colorful collaged pieces. She describes her work as an ongoing exploration without rules and conventions, continually generating new forms, patterns, themes, and textures. She is represented by online gallery cynthiabyrnes.com of CBCA Westport, CT. She maintains a studio at Firing Circuits in Norwalk, CT and prints in Brooklyn, NY. Marycmanning.com

Mark Schiff uses painting to express his love for nature. He enjoys the spontaneity and unpredictability in his artwork. His process uses mixed media and altered brushes to achieve a unique viewer experience. Mark is an award-winning artist having his third exhibit at the Wilton Library. He has exhibited extensively in Connecticut, New York City, Miami Florida and the Hamptons, Long Island. Markschiffartist.com.

Nancy C. Woodward is an award-winning photographer and mixed media artist. Her shadow portraits, colorful trees and ethereal landscapes depict unique views of the natural world. She experiments with different color palettes, papers, fibers, mediums, and surfaces to bring new realms into view. Nancy is a lifelong resident of Norwalk and has a studio, along with twenty-five other working artists, at Firing Circuits Artist Studios in Norwalk, Connecticut. She was an Artist in Residence at Silver Lake Conference Center in Sharon, Connecticut for ten years. She is a member of the Ridgefield Guild of Artists, The Rowayton Arts Center, The Katonah Museum Artists’ Association and the New Canaan Society of the Arts. Nancy has a BA in Psychology from Franklin Pierce University in Rindge, New Hampshire. She studied photography, encaustic painting and digital editing at The Silvermine School of Art in New Canaan, Ct. She studied privately with photographer Sandi Haber Fifield and encaustic artists Leslie Giuliani and Nash Hyon. Recent awards include: Best in Show in the Autumn Juried Exhibition at the Rowayton Arts Center in October 2019; Best in Show, the Betty Barker Award, in the fall 2018 Member Show at The Carriage Barn Arts Center. Ms. Woodward was the featured artist in the 2018 spring edition of The Wayfarer Magazine. Nancycwoodward.com.

Karen Vogel is a printmaker and painter who lives in Darien. Her work melds the influences of visual form, narrative, and nature. The language of print, typography, architecture, and organic forms emerge from multiple layers of a variety of printmaking and painting techniques. She is interested in the parallels between art-making and landscape design, her two passions. Karenvogelstudio.com.

Wilton Library is located at 137 Old Ridgefield Road in the heart of Wilton Center. For more information, please visit www.wiltonlibrary.org or call (203) 762-3950.