The Cannon Grange is upgrading and hosting community pot lucks!

Details
Published on Wednesday, 23 November 2022 15:28
Written by The Cannnon Grange 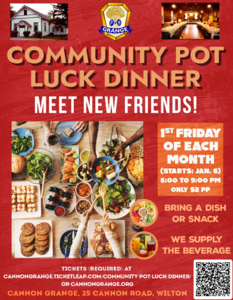 The Cannon Grange is upgrading!  Since September, a new group of officers have been working diligently to make the Grange a center of Wilton community life.

“Back in the day, when the Grange was the epicenter of the Community,” remarks Grange historian and long-time member Charles Gilliam,  “the place was extremely active and counted, among its members, the Olmstead's, the Hurlbutt's and other prominent families from Wilton’s storied past.”

A terrific rendition of the history of the Cannon Grange is found here.

Since the 80s however and through the pandemic and the aging of the membership, the Grange’s numbers substantially decreased - that is, until this Fall!

The Grange has seen upgrades this Fall to its electrical wiring and, importantly, according to Kateri Devlin, the Grange Treasurer, “there is now a more comfortable seating option, namely home theater couches.  So if a group would like to hold smaller, more intimate gatherings, or possibly, ‘breakout sessions’ from a larger meeting, the new seats are a terrific, comfortable option.  Moreover, they are fun for film or sports watching parties as the Hall acquired a large video screen last Spring.”     A picture of the new couches may be found here:  Renting Cannon Grange Hall – cannongrange.org

COMMUNITY POT LUCK – FRIDAY, JANUARY 6: The upgrades and seating will serve the Grange well as it is holding a number of events and trying to focus more on the community in the new year.   One such event, starting January 6, is the institution of community pot luck dinners.  The Grange provides the beverages; each attendees brings a dish.  Tickets are required for the event (only $2) and may be purchased at COMMUNITY POT LUCK DINNER Tickets in Wilton, CT, United States (ticketleap.com)

HOLIDAY MARKET & CRAFTS FAIR – SATURDAY, DECEMBER 3: On December 3, the Grange will hold its annual Holiday & Crafts Fair between 10 and 4 pm.   The event this year promises to be better than ever.  If you have any baked goods to donate for this event, it would be highly appreciated.

SANTA IS COMING ON FRIDAY, DECEMBER 16:  Did you know that Santa is coming to the Grange on December 16th  Your kids or grandkids will know that this is the real deal!   Tickets are available at: cannongrange.ticketleap.com/afternoon-with-santa-at-the-grange/

NEW YEAR’s EVE COMEDY FUNDRAISER - DECEMBER 31:  The Grange will be the site of a New Year’s Eve comedy special. Tickets may be bought at: cannongrange.ticketleap.com/new-years-eve-comedy/ or at cannongrange.org  “This happened very quickly – and we were fortunate enough to have some national class comedians who wanted to perform for this Grange benefit,”  remarks Shahan Islam, the VP of the Grange.  “The last comedy event we held in December sold out.” Comedy Night in Wilton Sells Out Again! (hamlethub.com)