Big Day of Birding on the Norwalk River Valley Trail 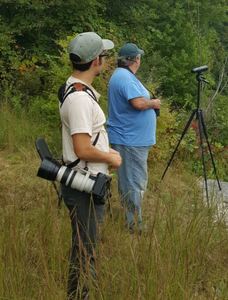 Big Day of Birding on the Norwalk River Valley Trail

On September 16th, seventeen birdwatchers set out to identify the maximum number of bird species in a single day along the Norwalk River Valley Trail (NRVT).

In the world of birdwatching, this is called a Big Day.

The birders split into six groups and covered ten different spots along the NRVT from Calf Pasture Beach in Norwalk, to Allen’s Meadow in Wilton.  By the end of the Big Day, the group identified 87 different species of birds.

Joe Bear, an experienced birder who led the Wilton team, said, “"Doing a Big Day, especially on foot, allows you to spend an extended amount of time in the field experiencing details  you might not otherwise appreciate. Thanks to its diverse habitat winding through meadows, fields, woodlands, and along watercourses, the NRVT offers a perfect venue for a Big Day out in Wilton and Norwalk".

Kathy Van Der Aue said, "I was excited to represent the Connecticut Audubon Society for the Big Day on the NRVT as I was unfamiliar with the trail. CAS makes an effort to engage urban populations in the environment and this trail is fun to bird while easily accessible in Norwalk by foot.  It has a wide variety of habitats and is fully ADA compliant so everyone can enjoy it."

The Norwalk Hour helped bring out volunteer birdwatchers by publicizing the event and Birds & Beans Coffee provided free coffee for the Sunday event when the volunteers gathered at the Hour’s office to review the results of the Big Day.

Charlie Taney, the NRVT’s Executive Director, said, “Everyone involved really enjoyed themselves and we’ll plan another Big Day for the Spring bird migration in  2018”.