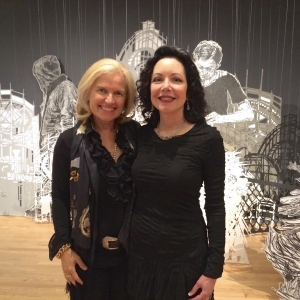 Don’t miss a special Westport Arts Center ArtSpeaks event on Tuesday, March 10 from 6-8pm featuring Robin Jaffee Frank, Chief Curator and Krieble Curator of American Paintings and Sculpture at the Wadsworth Atheneum Museum of Art.   The ArtSpeaks series is designed to bring accomplished, groundbreaking and renowned leaders of the art world to the local community.

Jaffee Frank holds an M.A. and PhD in the History of Art, both from Yale University. She has extensively lectured and published on American visual culture, and previously spent 21 years curating at Yale University Art Gallery.

She curated the current exhibition at the Wadsworth, Coney Island: Visions of an American Dreamland, 1861-2008. Both The Coney Island exhibit, and her book on the subject, America’s Playground, have garnered an extremely positive response from the press and public.  Jaffee Frank has been recognized for bringing to life the allure of Coney Island, and the influence that it has held on American culture, for a period of over 150 years.

The Boston Globe said of the Coney Island exhibit, “Granted, it’s only February, but this year is unlikely to see a museum show as varied and vibrant (2/10/16),” and the Northeast Popular/American Culture Association wrote, “Curator Robin Jaffe Frank’s exhibit is so thoughtfully arranged that wandering among its 140 pieces is akin to being in a living time capsule (2/6/15).”

The Westport Arts Center has collaborated with the Wadsworth Atheneum to present an auxiliary exhibition with their “Coney Island: Side Show” photography on display through March 14. Additional supporting current exhibitions include “Sideshow” at the Edgewood Gallery, Yale University School of Art in New Haven through March 20, and “Skeeball,” with Donna Dennis and Don Joint at Real Art Ways in Hartford through May 31.

Tickets for this ArtSpeaks event are $25 each ($20 for Arts Center members) and can be purchased by contacting the Westport Arts Center by phone (203/222-7070) or through the Arts Center website: http://www.westportartscenter.org.  The event is sponsored by J.P. Morgan Chase.

Join the Westport Arts Center for its ArtSafari: Private Art Tours event at The Armory Show on Friday, March 6 from 12-1:30pm.  The tour will be guided by Helen Klisser During, the Arts Center’s Artistic Director.  Attendees will gain a rare exclusive VIP tour of the 2015 Armory Show, a leading international contemporary and modern art fair and one of the most important annual art events in New York.

The Show takes place March 5-8 on Piers 92 & 94 in central Manhattan, and is devoted to showcasing the most important artworks of the 20th and 21st centuries. In its sixteen years the fair has become an international institution, combining selections from two hundred of the world's leading galleries with an exceptional program of arts events and exhibitions throughout New York during the celebrated Armory Arts Week.

Tickets are $60 each ($50 for Arts Center members) and can be purchased by contacting the Westport Arts Center by phone (203/222-7070) or through the Arts Center website: http://www.westportartscenter.org.

On March 22 from 3-5pm the Hartford Jazz Orchestra (HJO) will perform songs from the great American songbook with vocalist Nicole Pasternack at the Pequot Library in Southport.  The Hartford Jazz Orchestra began in 1965 and has been at the Arch Street Tavern since 1998.  Among its notable band members was Chic Cicchetti, who joined as a trombone player and later rose to lead the Orchestra.

Tickets are $30 each ($25 for Arts Center members) and can be purchased by calling the Westport Arts Center at 203/222-7070 or through the Arts Center website: http://www.westportartscenter.org