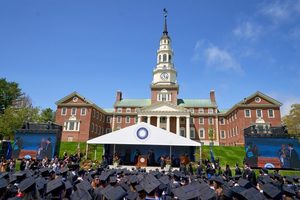 Congratulations to Wilton residents Emily A. Dolan and Jackson F. Ward who graduated from Colby College

In an outdoor ceremony May 26, 462 degrees were awarded to members of Colby's Class of 2019 at the College's 198th Commencement. Award-winning television writer David E. Kelley told graduates to reject a career that is "not so terrible" and instead pursue what will make them truly fulfilled. Colby President David A. Greene handed a diploma to each of the graduates.

Emily A. Dolan, who majored in global studies and anthropology, attended Greens Farms Academy and is the daughter of Brian and Elizabeth Dolan of Wilton, Conn.

Jackson F. Ward, who majored in government and economics with a concentration in financial markets, attended Wilton High School and is the son of William and Nancy Ward of Wilton, Conn.

David E. Kelley, creator of popular and critically acclaimed shows from Ally McBeal to Big Little Lies, spoke to a crowd of more than 3,000 and urged Colby College graduates to reject a career that is "not so terrible" and instead pursue what will make them truly fulfilled.

Acknowledging that his advice might seem banal, he urged students to do what gives them joy. "Cling to the [inner] scream," Kelley said. "Keep it in there because so many, after failing to get what they want, decide the easier route is just to invalidate the want and pretend it was never a goal to begin with, and you become a little more deadened inside."

Colby President David A. Greene handed a diploma to each of the graduates.

Founded in 1813, Colby is one of America's most selective colleges. Serving only undergraduates, Colby offers a rigorous academic program rooted in deep exploration of ideas and close interaction with world-class faculty scholars. Students pursue intellectual passions, choosing among 58 majors or developing their own. Colby's innovative and ambitious campaign, Dare Northward, will support deeper connections between the College and the world and a fully inclusive experience for all Colby students. Colby is home to a community of 2,000 dedicated and diverse students from more than 80 countries. Its Waterville, Maine, location provides unique access to world-class research institutions and civic engagement experiences.