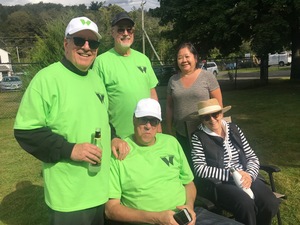 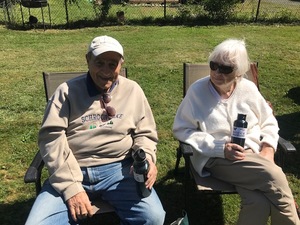 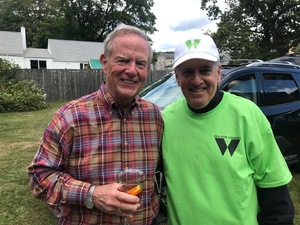 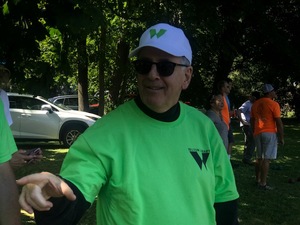 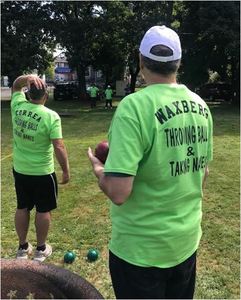 The battle for the esteemed title of Branchville Champion Bocce Team raged for nearly eight hours on a beautiful Saturday, September 7 on the site of the new Branchville bocce courts located at 59 Willridge Road in Ridgefield. At the helm of the Fifth Annual Branchville Charity Lawn Bocce Tournament was Mitch Ancona, owner of Ancona's Wines and Liquors. "I love helping people make memories," he says. And, once again, he succeeded. Thank you, Mitch.

Wilton Library bocce players included Michael Crystal, John Keogh, Jon Waxberg, and Bob Correa (shown in photo #1 from left to right with fan Anita Waxberg and Library Marketing Manager, Janet Crystal). Taking a sabbatical from play this year, but definitely the #1 fan, was  Fabio Biagiotti. He is shown in photo #2 with his wife.

Pre-Bocce gaming began at 9:00 am. In addition to provisions including bubbly, kegs, grills, and an array of food, participants proudly represented their charities by way of personalized tee shirts, decor, and swag. It should be noted that the Ridgefield Library team was adorned in matching Game of Thrones-like capes, complete with fur collars.

"The motto of this tourney is simply to have fun...and give some money away to some awesome organizations that help make our communities even more wonderful," says Ancona.

Each team engaged in friendly competition for over $3,000 in prize money.

Comprised of Chris Couri, Woody Harford, Jeroen Vanbeek, Marci Coffin, and Peter Coffin, and John Doyle, team Ridgefield Library brought their "A" game (plus their over-the-top garb) and walked away with top prize, $1,500.00 as well as bragging rights and a handsome trophy.

The Boys & Girls Club of Ridgefield finished in 2nd place earning $750. In 3rd place with $500 in prize money was The Women’s Center and in 4th was Wilton Library, earning $250.

A coveted award is for "Spirit" and that went to RVNA for their tailgate cheer and overall sportsmanship.

Ancona explains, “The bocce tournament is a culmination of the traditional Ancona business objective,” said Ancona.  “Focus on family, community, and charity – with a good dose of fun."