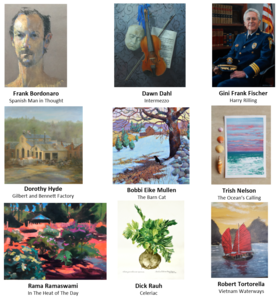 The bitter cold air that arrived early in December was a cruel reminder that winter is here, but at Wilton Library, “Winter Interlude” is an inviting way to seek shelter from the cold. The art exhibition featuring nine local artists opens on Friday, Jan. 10, from 6 to 7:30 p.m. and runs through Thursday, Jan. 30.

Many of the artists are from previous Summer Shows at the library and most are either current or former residents of Wilton. They are Dawn Dahl, Gini Fischer, Dorothy Hyde, Trish Nelson, Rama Ramaswami, Dick Rauh (now from Westport) and Robert Tortorella. Joining the group are Frank Bordonaro of Norwalk and Bobbi Eike Mullen of Weston/Georgetown. The more than seventy works highlight the talents of this group who represent diverse styles, subject matter and choices of medium.

Ed MacEwen, art chair for Wilton Library, said, “This is such a strong group of accomplished artists. They are among the community’s favorites who return year after year. And then we had the good fortune of being able to add to the collective. The library is a perfect place to spend time in January and reflect on this beautiful exhibition.”

The artists have diverse backgrounds that bring them to this exhibition:

Frank Bordonaro is a social psychologist with experience as an academic, executive and consultant working for major corporations in training, talent development and executive learning. He took his first drawing lessons after retiring in 2002 and he has continued his long relationship with Silvermine Art Center. He also displays his drawings and paintings at the Rowayton Art Center and New Canaan’s Carriage Barn. Frank has been a volunteer art coach at Silver Hill Hospital for several years. He and his wife, Sally, live in the Silvermine section of Norwalk, CT.

Dawn Dahl has always been a creative soul having grown up in Minnesota playing piano and singing with dreams of becoming an opera singer. She turned to writing for a more dependable means of support that she parlayed into a career in health and medical public relations. Upon retiring, she began to explore painting at Silvermine School of Art, developing a kindred spirit with Wilton artist and teacher Justin Wiest. She paints primarily classical oils of still life using bold color, strong detail and a clean aesthetic. She lives in Wilton.

Gini Frank Fischer has always been an artist. As the seventh of nine children, she was born quite nearsighted and had to amuse herself when she misplaced her glasses, which was often. She would draw, making something look real, and discovered that she could create. She felt it was wonderful to possess a special skill to stand out in her large family and to astonish and delight the adults in her world. Art became what she pursued, in many mediums, for all of her life. Gini lives in Wilton.

Dorothy Hyde, also a Wilton resident, earned her BFA from Syracuse University and a MA from the College of New Rochelle. She worked as a designer of promotional material for such companies as Estee Lauder and Holt, Rinehart and Winston. She also enjoyed being a freelance photographer as well as a high school art teacher. She worked in the healthcare field as an administrator and was able to use her interest in art to design art therapy programs. Her artistic interest lies primarily in painting scenes from nature.

Bobbi Eike Mullen has mastered the illusion of realism, working in acrylic with egg medium.  Her drawings of the human figure have been judged sensitive and classical.  Currently, she has been challenged and rewarded by her first love— Impressionism. Her lifetime pursuit of the fine art experience has enabled her to receive numerous awards and to participate in countless exhibitions. Bobbi has worked for the National Park Service for ten years and has exhibited throughout New England. She also is an innovation instructor at G&B Cultural Center. Her works are in private collections in the U.S., England, France, and the Readers’ Digest Corporate Collection. Her home and studio are in Georgetown, CT.

Trish Nelson has owned four different businesses over the past 40 years but now her art is taking a front seat on her life's journey. Although her background is in illustration and photography with degrees from University of Arizona in Tucson, she yearns to paint and draw landscapes and vignettes that tell a story or depict a mood. She most recently lived in Wilton.

Rama Ramaswami has been a business journalist for many years and has gained national recognition for using fine art and photography to enliven trade magazines. She began painting more than 30 years ago in her native India, where her formal art instruction included private lessons in oil and watercolor techniques. She now works primarily in oils and acrylics. For more than 20 years, she has been studying with painters such as Joanne Roy and Dana Goodfellow at the Rowayton Arts Center, and currently paints with a group of artists from the RAC. She lives in Wilton.

Dick Rauh came to botanical painting in retirement, after a career in motion picture special effects. In addition to earning a certificate in botanical illustration from The New York Botanical Garden, in 2001 he received his doctorate in plant sciences from the City University of New York. Rauh’s work won the Gold Medal and “Best in Show” awards at the 2006 Royal Horticultural Society Show in London. He is a member of several distinguished botanical guilds and his work is in permanent collections of the Lindley Library in London, the Shirley Sherwood Collection in Kew Gardens, the New York State Museum, and the Hunt Institute for Botanical Documentation at Carnegie Mellon University. He has been an instructor at the New York Botanical Garden since 1994. He was a Wilton resident and now lives in Westport.

Robert Tortorella is a 50-year resident of Wilton. From an early age, he had an interest and some talent in drawing and painting. After a long career as a C.P.A. with Coopers & Lybrand, then Price Waterhouse, he retired from Price Waterhouse Coopers in 2003 and continued painting as his avocation. He has worked in most media including oil, watercolor, pen and ink and charcoal, however, his preferred media is acrylic.

The reception is free and open to the public. Most of the works are available for purchase with a portion of the proceeds benefiting the library. The Wilton Bulletin is the media sponsor for the exhibition.