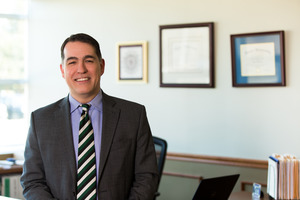 “Mr. Cashman is a proven leader with a strong commitment to the excellence and the tradition which are hallmarks of a Jesuit, Catholic secondary education. He has demonstrated a depth of strategic rigor and data-driven decision making not only in his time at Northwest Catholic, but throughout his career,” said President Nemec, “and I am confident that Mr. Cashman will lead Fairfield Prep into a successful future.

I would also like to thank Father Tom Simisky, S.J., for his service to the Fairfield Prep community, his commitment to our shared mission, and wish him the best in his future endeavors.”

Previously a teacher in the Theology Department at Fairfield Prep, Cashman returns to the school after a three-year stint as the president and head of school at Northwest Catholic, where he not only acted as the Catholic spiritual leader and chief development officer of the school, but also oversaw all professional staff, budgetary processes, official communications, and gift-giving.

“Mr. Cashman has all the qualities and experience we were seeking, including having served as a faculty member at Prep for seven years,” said Sally Bednar, chair of Fairfield Prep’s Board of Governors. “I am pleased that he will lead Prep as our next president, and I am confident he will ensure Prep’s continued focus on academic excellence, thoughtful innovation, and athletic vigor.”

“As a Catholic parent and educator, I have received countless graces from my own Catholic and Jesuit education,” said Mr. Cashman on his new appointment. “I am thrilled and humbled to be coming home to my Jesuit roots and the Fairfield Prep community which has given so much to me and my family, and I look forward to a powerful collaboration and partnership between Prep and Fairfield University, the only Jesuit secondary model of its kind in the United States.”

Fairfield Prep enjoys an outstanding reputation and history of success due to the efforts of the excellent administration, faculty, and staff, as well as the support and commitment of students, parents and alumni. The Prep community is excited to have Mr. Cashman, with his passion and commitment to Jesuit education, lead Prep into the future.