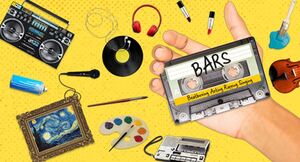 Ben Senneff of Wilton was part of the talented cast and crew in the Baldwin Wallace University and Playhouse Square collaborative production of "BARS (Beatboxing, Acting, Rapping, Singing)" during the spring 2021 semester. Senneff, a graduate of Wilton High School, served as production assistant in the production.

The hip-hop, music theatre-based improv show combined the classic music theatre art form with contemporary skills in beatboxing and rapping. The culturally diverse and stylistically dynamic cast piloted the interactive audience experience through the world of improvisational sketch comedy while creating scenes and songs completely on the spot. Defying gender, genre and technological challenges, "BARS" brought a new level of innovation and entertainment to virtual theatre.

Baldwin Wallace music theatre alumnus Jay Ellis "JEllis" created and directed the production. He shared, "The primary source of inspiration for 'BARS' is the storytelling of hip-hop. I wanted to amalgamate the classical presentation of music theatre with the off-the-cuff nature of improv through a hip-hop-fueled production. BW gave me a place to discover who I wanted to be in this world. It was where I developed and sharpened my natural talents and skills."

"BARS" marked the fourteenth collaboration between Playhouse Square and Baldwin Wallace University's renowned music theatre and arts management and entrepreneurship programs. Through the collaboration, BW senior arts management and entrepreneurship students had the opportunity to produce the show under the guidance of Playhouse Square staff while music theatre students performed in a professional theatre.

"BARS" is one of an extensive number of performance experiences providing real-world opportunities for students in the Baldwin Wallace music theatre program. From lead roles on Broadway and London's West End to prime-time television, film and more, music theatre alumni have garnered top acclaim for more than 20 years. As a result, BW's program has earned accolades from leading agents, casting directors, critics and other industry professionals. For upcoming music theatre performances, visit bw.edu/events/music-theatre.