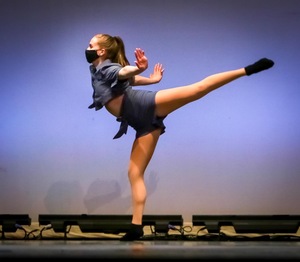 Five seniors gave their farewell performance with The Ridgefield School of Dance on May 21 at the Klein Auditorium performing the ballet Four Seasons, and Exhale by the jazz department.

Ridgefield High School’s Makena Davi, Ariana Mirfakhraie, and Alexandra Westrick were joined by Rebecca Ronai from Weston and Alexandra Magnusson from Wilton as Ridgefield School of Dance alums. All these talented artists have spent a good part of their life in ballet slippers and/or jazz shoes in the studio located at 66 Grove Street.

With so many years and experiences, each dancer has a favorite ballet, part, memory and lesson learned. And, each has had a busy life outside of the studio with other pursuits.

Makena Davi performed in at least 13 Nutcracker performances and another 14 ballets, including Alice in Wonderland, Madeline, Coppelia, Carnival of the Animals, and Cinderella. She loves dancing in large ensemble dances such as Waltz of the Snowflakes in The Nutcracker, and was thrilled to dance the part of Dew Drop in 2019. She learned that hard work, reflecting the effort expended, really does pay off. Makena was a class assistant for several years and loved watching the younger dancers learn and grow. In addition to taking ballet at least four days a week, Makena participated in the RHS music program and was a junior volunteer at the Milford Hospital Emergency Room. She will study at University of Florida with plans for med school.

Ariana Mirfakhraie played violin with the RHS Symphonic Orchestra and plans on studying at the University of Vienna in Austria. Her favorite ballet was Paquita and her favorite part was as the Emerald Fairy in Sleeping Beauty. Ariana says Emerald Fairy was challenging in that it pushed her as a dancer, and it was fun because it was part of an ensemble with her Company sisters. In addition to Ballet, Ariana was a member of the Jazz Company and performed in “Exhale,” the jazz department’s contribution to year-end festivities.

Ali Westrick joined the studio in 6th grade. She has loved all of her dance experiences and especially enjoyed learning new material and expressing different emotions through choreography. Dance has taught her the joy of releasing the stresses of everyday life. When not in the studio, Ali was involved with the RHS Cheer team and ASP. This fall, she will be attending University of Tennessee where she will study nursing.

Starting ballet at three years old, Alexandra Magnusson has applied the precise understanding of movement and coordination learned from ballet to her passion in horseback riding, and ski team. Balancing her participation in ballet and jazz company with academics, Alexandra also participated in the National Honor Society. With many performances behind her, “Madeline” was much beloved — with a large cast, many props and a charming story. Her favorite role was performing “Russian” in Nutcracker.

Dancing with others has enforced in Alexandra the value of making and honoring a commitment, while balancing it with other parts of her life. Heading to Boston College to pursue STEM-related studies, Alexandra intends to continue with dance as part of her life.

Rebecca Ronai started to dance at the age of three and joined the Ridgefield School of Dance at eight. Her favorite ballet is the comical Cinderella, and favorite part was as the white cat in Sleeping Beauty. Gaining confidence performing in front of others as a dancer also served her well in outside activities serving as Vice President of the Weston High School Debate Team where she was also Salutatorian, Co-Captain of CT State Champion Mock Trial, and Circle of Friends. She will be attending Dartmouth in the fall.

This past year, with few extra-curricular structured activities, all five shared their appreciation for having a place to go and express themselves emotionally and artistically through dance with their friends. They are a sisterhood that works together, plays together and expresses themselves artistically.

Continuing to dance in the future will be a way to be together, though apart. Communicating the sentiments of the group, Ronai said, “Dance was one of the things that helped [us] get through Covid-19 because, despite the pandemic, it still continued. Especially in the fall when most things were shut down or online I loved being able to go to the studio every day and be with my friends.”

“These dancers have been an integral part of the Ridgefield School of Dance family for a huge part of their lives. I cannot tell you how much I have appreciated their commitment to dance, each other, and the school,” says Executive Director Alison Brown. Artistic director Jessica Boelts has been teaching these young women since they joined the school. “I have truly enjoyed watching these dancers grow up. I’ll miss them, but look forward to seeing what their future holds,” she said.

For more information, www.theridgefieldschoolofdance.com or 203-894-5957.