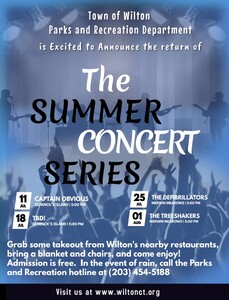 On Sunday Captain Obvious opened this year’s Parks and Recreation Concerts in the Park series with a roar.  Thank you, Andy, John, Dan, Mike and Dave!

The series continues this Sunday with the Treeshakers performing at Schenck’s Island from 5:00 to 7:00pm. This Roots-Rock Americana band has been entertaining crowds since 2017 with soulful and popular cover tunes spanning genres for all ages.  Wilton resident Donna Savage is the frontwoman for the band, along with other Wilton residents James Konatsotis, on guitar and vocals; Jack Jackson, guitar and vocals, and Lorenzo Diurno, bass and vocals; as well as Park and Rec’s own Mike Pirre from Bethel on drums and vocals; and Fairfield’s Ted Eyes on keyboard.

Attendance is free. Bring a blanket and chairs.  Parking isn't available at Schenck's. Instead, park in the Center and arrive early to grab take-out from Wilton’s nearby restaurants.  Additional seating is available across the river at the Chess Park.  In case of inclement weather, please call (203) 454-5188.

The series then moves to Merwin Meadows for July 25th and August 1st.

Later in August, Parks and Recreation is sponsoring Brooklyn-based Hideaway Circus with their production of Stars Above on August 27th,  28th and 29th.  Tickets are on sale now.

Summer offerings wrap up with a special Labor Day Weekend Celebration on Saturday, September 4th.  Details to be announced next week.