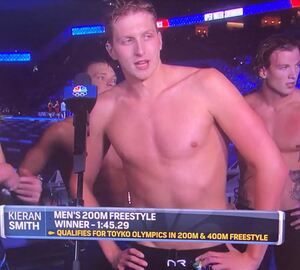 Smith will be swimming in Lane 5.

Smith qualified for the finals last night earning the second spot in the season heat. According to Swimming World Magazine, Smith beat his personal best of 1:45:29, completing the 200 free with a time of 1:45:07.

Smith told Swimming World Magazine, "That wasn’t too bad. I wanted to lay it out that first 100, 150, try to stay with it at the end because I know there’s a lot of fast swims coming up. I’m not sure how it was going to feel in the water, been having some problems with my stomach this morning so I barely ate. But very pleased to go this time and have a good lane for the final." Read the full story here.

As you know, Kieran won the bronze medal on Saturday in 400m free! He began swimming at the tender age of seven training at Ridgefield Aquatic Club under and now swims for University of Florida Gators and believes his interest in open water events complements his competitiveness in the pool. He began swimming at age seven.

Swimming World Magazine says that the final will come down to who manages to deliver 1:44 performance tonight. "Five men in the field have previously recorded 1:44s (Scott, Dean, Hwang and Malyutin this year, Rapsys in 2019), but it’s been clear at these Olympics that lifetime bests and the on-paper analysis don’t mean anything when it comes to Olympic finals."