Wilton Library’s 125th year was one for the books! 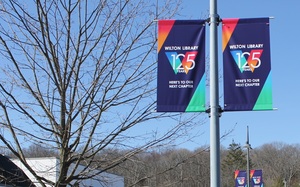 Library Association’s 125th year was described as “the best of times and the worst of times” by library officials as they reflected on the events of the past year, borrowing a sentiment from Charles Dickens’s famous classic, A Tale of Two Cities.

The 125th Annual Friends meeting convened on September 23, 2020. President Michele Klink conducted the virtual business meeting. Klink thanked the Board of Trustees for its accomplishments and achievements during this difficult year, which technically ended in June, 2020. The meeting had to be postponed due to the pandemic and adhering to state and local guidelines regarding gatherings.

From securing the Brubeck Collection to creating the 125th logo, from navigating the health crisis to HR and financial experts understanding all the new regulations involved with COVID-19, trustees were integral to the library’s wellbeing. In particular, work on the Wilton Library Association Endowment Fund was a passion and mission of Endowment co-chair Nick Davatzes. Klink noted that Davatzes and co-chair Lawrence Mannix “steered the library into a new era that will help ensure stability in providing artistic and cultural programs for years to come.”

Klink remarked, “May these stories serve as examples of the resiliency, the strength, the innovation that brought this library forward 125 years and may they be the inspirational springboard from which we enter the next 125.”

Kim Healy, treasurer for Wilton Library Association, reported that the year ended with a small surplus, achieved with cost savings from the closure due to COVID and extra fundraising for the Annual Appeal. The budget for the coming year was worked on diligently and included considerations for additional costs preparing the library to open safely for the pubic, as well as expected revenue losses from cancellation of book sales and events. Healy went on to thank the Board of Selectmen “for all their support and understanding during these trying times. We are all in agreement on how important the library is to the Wilton community.”

Elaine Tai-Lauria, executive director of Wilton Library, who opened her remarks with the “best of times” quote, explained how the year had started with enthusiasm, optimism and special celebrations, for this was the library’s 125th anniversary that was to be shared with the Wilton community. In January, it was announced that the Brubeck Collection, one of the foremost jazz archives of the late Dave Brubeck, was coming home to Wilton. The library unveiled its 125th logo at the Winter Carnival, and then a few weeks later bright, colorful anniversary banners were on the light poles throughout Wilton Center for all to celebrate. In March, the library received the CT Library Association Award for Excellence in Public Service for the Wilton Reads 2019 program on the Holocaust, which also was a collaboration with Wilton Public Schools. Wilton Library’s robotics team, Singularity Technology, won several awards and was the winning team in Connecticut at the First Robotics Competition, earning it a spot to compete at the Worlds’ competition in Detroit. All these accomplishments were coupled with the regular ongoing programs – author talks, world-class jazz concerts, scholarly lectures – that were embraced by the community. Underscored Tai-Lauria, “It was the best of times.”

And then, as the world is all too familiar, the COVID-19 pandemic brought everything to a standstill. The library was closed…the building that is a shelter to so many in a crisis, was shuttered. Intoned Tai-Lauria, “It was the worst of times.”

Library staff pivoted with the help of its technology team, and soon was offering digital resources – downloadable eBooks, eAudiobooks, eMagazines, streaming movies, TV shows, music, and so much more. Patrons began receiving newsletters three times a week as a lifeline to keep them nurtured during the health crisis. They were helped with instruction on everything from how to download materials to how to stay in touch with grandkids watching story times over Zoom. Once patrons became familiar with the platform, the library began providing its top-notch programming virtually to keep everyone informed, connected, enriched and inspired.

The library was always busy during the building closure and since the opening of the drive-thru window in June, Tai-Lauria compiled some impressive facts:

Over 4,000 cars were served via the drive-thru window

3,800 participants have attended over 200 virtual programs, with an additional 1,500 who viewed the recorded programs.

Over 1,000 reference questions were answered

The work continues now that the library is open for Express Services by appointment, Mondays through Saturdays, 11 a.m. to 3 p.m. Details on how to make appointments may be found on the library’s website at www.wiltonlibrary.org. Additionally, the library’s robust slate of programs will continue virtually with the reintroduction of Wilton Reads and its jazz-themed programming, along with many more programs for the fall.

During the meeting, Sanders noted that four trustees were retiring from the board and were thanked for their service. They were Nick Davatzes, John Hinshaw, Mark Kaduboski and Lawrence Mannix. Each was honored with a book in their name that will become part of the library’s collection.

Saraswathi (Saras) Nair, M.D., a trustee of Wilton Library Association, was honored as the Volunteer of the Year. In large part, her expert medical guidance has helped to provide a safe environment for patrons and staff.

The library’s Network Services staff, Mary Anne Mendola Franco, Dale Cates and Thomas Kozak, were all recognized as Staff Members of the Year. They prepared computers for staff to work remotely and they keep relentless watch over all things technology-driven for patrons and staff during the pandemic.

Tai-Lauria’s encouraging words were a nice wrap up for the meeting, “Perhaps we may be re-entering the “best of times” again.”