Congressman Jim Himes, Planned Parenthood Back Will Haskell for Re-Election 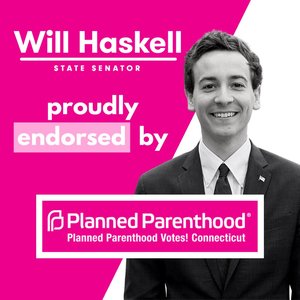 Westport, CT—State Senator Will Haskell secured two major endorsements this week for re-election. Both Congressman Jim Himes of Connecticut’s 4th District and Planned Parenthood Votes! Connecticut endorsed the first-term legislator for re-election in Connecticut’s 26th Senatorial District. The endorsements are a clear reminder that major national issues are on the ballot this year at the state legislative level.

“Sometimes, state legislative candidates like to pretend that big, national issues don't affect us here in Connecticut. From two years in the state Senate, I can tell you that that's not true.

When Donald Trump cut federal funding for women’s health and attacked the legitimacy of Roe v. Wade, it fell on my colleagues and me in Hartford to protect reproductive health in Connecticut,” said Haskell.  “That's why I'm especially grateful to receive the endorsements of Congressman Himes and Planned Parenthood—a politician and an organization that know that the fight against the Trump agenda doesn't stop at the state border.”

“Will has been fighting for us on the issues that we care about most: on good gun safety regulation, on preserving our environment and the green space that is important to our quality of life, and of course on transportation—because Will understands that, without a good transportation network, we do not have growth, we do not have prosperity in our communities,” said Himes. “I’ve known him for a long time. His heart is in the right place; he is everything that we want in a public servant.”

Will Haskell is running for re-election to the state senate in the 26th district of Connecticut, which includes portions of Westport, Ridgefield, Wilton, Redding, Weston, Bethel, and New Canaan. For more information about Will’s campaign and to volunteer to help, please visit WillHaskell.com.