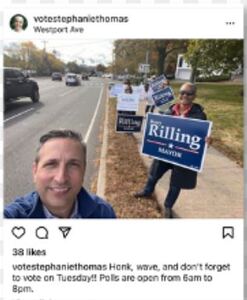 In the final days of the last political campaign, a controversy erupted over an emoji posted on Instagram. It deserves to be explained.

I posted the “OK” emoji under a photo of Sen. Bob Duff on Rep. Stephanie Thomas’ Instagram feed. It was meant as a reference to Duff’s attempt earlier in October to slander a Darien Republican who had used the innocent gesture during a candidate forum.

Duff later deleted his post but not until it had generated news coverage and he has not, to my knowledge, ever apologized to the Republicans’ BoE candidate, David Brown, for his scurrilous insinuation.

Unlike Bob Duff, I have personally and privately apologized to Rep. Thomas for the hurt that the emoji caused her. That hurt was real. It was also unintentional.

The emoji on Thomas’ Instagram feed was aimed at Bob Duff, not Thomas. Its intent was to highlight Duff’s cowardice and the absurdity of assigning conspiratorial meaning to one of the most commonplace and innocuous of hand gestures.

In the end, Duff was the target of the emoji and Rep. Thomas was an innocent bystander.