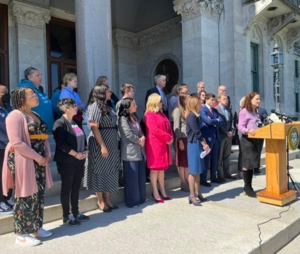 Ridgefield-area residents, human rights activists, and elected officials will lead a rally to demonstrate public solidarity in opposition to the draft Supreme Court decision that is poised to over-turn Roe v. Wade, the 1973 Supreme Court decision that recognized a Constitutional right to abortion in the United States. The rally will take place on Sunday, May 15, at 1 pm on the steps of Wilton Town Hall, 238 Danbury Rd, Wilton, CT. The Supreme Court is widely expected to finalize and adopt the draft within the next 45 days.

Called “Voices for Choice,” the rally is being organized by residents of Ridgefield, Weston, Redding, Wilton, New Canaan, and Westport. According to the organizers, the rally is intended to demonstrate solidarity with the super-majority of Americans who have consistently expressed, in opinion polling, their opposition to the prospect of Roe v. Wade being over-turned. Among those scheduled to address the crowd are U.S. Senator Richard Blumenthal, Lt. Gov. Susan Bysiewicz, and Ridgefield’s own State Representative Aimee Berger-Girvalo.

Since taking office in January, 2021, State Representative Berger-Girvalo has emerged as the Connecticut state legislature’s leading voice on women’s health and reproductive rights. Her role as a state-wide champion for reproductive rights was on prominent display earlier this week when she spoke at Senator Blumenthal’s Monday press conference announcing efforts to codify reproductive rights in federal statute, and again on Tuesday when she spoke during Governor Lamont’s official signing ceremony for Connecticut’s new abortion rights statute, of which Berger-Girvalo was a co-sponsor and legislative lead.

Ridgefield resident Carina Drake, one of the Voices for Choice organizers, said that since the draft opinion was leaked, “People across all walks of life have reached out to share their heartfelt indignation over the reversal of Roe. Many community members are expressing anxieties about the future of contraception access and about the potential for overturning the ruling in the landmark case Obergefell.”

Ms. Drake invited all area residents who support reproductive freedom and women’s health to attend the rally, support one another, and peacefully demonstrate that women’s right are human rights.